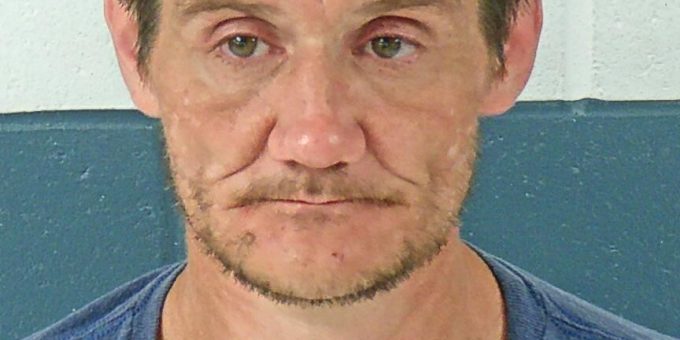 (MITCHELL) – Police arrested 44-year-old Robbie Leatherman, of 227 20th St., early this morning on a warrant charging him with public intoxication and disorderly conduct.

According to a probable cause affidavit, on July 28, just after midnight, Mitchell Police Officer Michael Bargo was called to the area of 4th Street between Warren and Main streets after a report of a suspicious male yelling and walking in the alley.

Officer Bargo spotted Leatherman on the edge of 4th Street.

“The male was spinning in a circular motion while throwing his hands up above his head,” Officer Bargo wrote. “As I approached the male, I immediately recognized and identified the male to be Robbie Leatherman.”

As Officer Bargo approached Leatherman he began to stagger off the street onto the grass behind a residence.

Leatherman was asked to stop but he continued to keep walking and tripped in the grass.

“Robbie then began to kick his legs rapidly and flail his arms to
his sides,” Officer Bargo wrote. “At this time, I requested dispatch to send
me EMS and another officer to my location.”

Leatherman was asked to stand up but he continued to kick his legs and flail his arms.

Officers assisted Leatherman to the police car, but he continued to struggle to walk and had to be picked up multiple times.

An IU Health Hospital ambulance crew arrived on the scene and assessed Leatherman. An officer then transported Leatherman to St. Vincent Dunn Hospital for a medical evaluation.

While at the hospital, Leatherman continued to yell and had to be told several times to be quiet and to stop yelling. Once evaluated Leatherman was transported to jail.