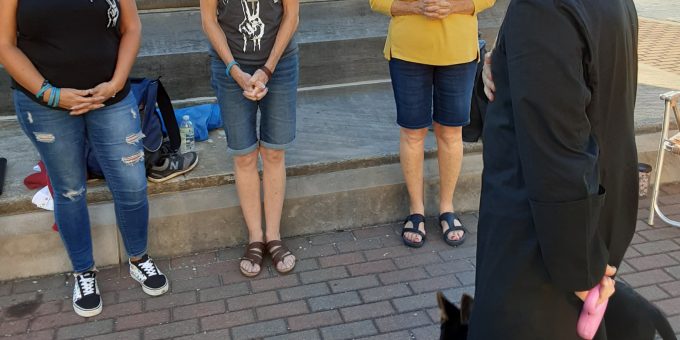 (BEDFORD) – The virtual sleepout fundraiser for the Shalom Center and Friend’s Place was held Friday night. Just prior to Friday evening, $10,000 was raised and the overall goal was to raise $50,000.

This fundraiser is one of the most important for Friends Place as $50,000 is a quarter of the budget for the group. Friends Place provided over 14,000 nights of shelter for 227 people last year.

Ginny Fullen and Jennifer Richason slept under the stars on the Lawrence County Courthouse square in Bedford to bring awareness to the homeless situation in Lawrence County.

The two spent the night near the Lady Liberty statue. Guardian angels from the church joined them throughout the night to lift up prayers for the homeless.

“I have prayed about this and was prompted by the Holy Spirit to do this. I wanted to sleep out in a public place to bring awareness to homelessness,” Fullen added.

The virtual sleepover is a fundraiser for the Shalom Community Center in partnership with First United Methodist Church in Bloomington and for the Men’s Warming Shelter in Bedford.

“This is to promote awareness of the plight of homelessness, teach your children in the way of the Lord,” Fullen added.

On Friday night, Father Adam Ahern blessed the women’s efforts and prayed for those who are facing challenging times in Lawrence County. He also prayed for protection for those involved in Friday evenings sleepout.

A year round shelter for men is not available at this time. The homeless population has been seen living in their vehicles as well as in tents in undisclosed locations throughout Lawrence County.

Currently, the Men’s Warming Shelter is using a building owned by the City of Bedford. The organization is working towards providing a more permanent location, as well as providing year-round services.

Homeless men face stereotypes and stigmas associated with their plight that sometimes is of their own doing, and other times is just how things happened when life threw them unexpected problems.

The Men’s Warming Shelter opened after a homeless man died due to the bitter cold temperatures one winter in Bedford.

The Men’s Warming Shelter is trying to provide men services they need to improve their outcomes later in life. In the short time of the shelter being opened, there have been several success stories of getting men jobs and securing permanent living situations.

Jerimiah Turner is one of the success stories of the Bedford Men’s Warming Center. Turner now has a job, apartment, and is working on getting his son back after hitting rock bottom.

There are many more individuals who have been able to find job placements and assistance in locating birth records, drivers licenses and social security cards to enter the local workforce.

Many local businesses have been willing to give these men a chance in life, even with mediocre job history and legal issues.