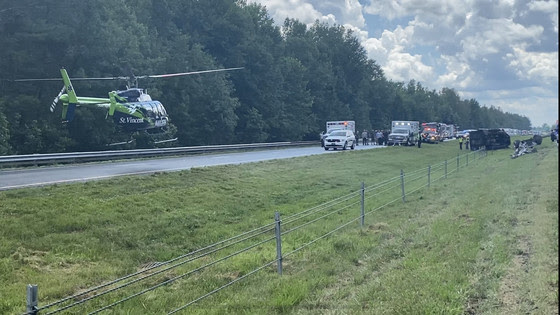 (AUSTIN) – Today, the Indiana State Police investigated a single-vehicle crash on I-65 in northern Scott County that sent a Scottsburg, man to a Louisville Hospital for treatment of serious injuries.

At approximately 12:30 p.m., troopers from the Versailles and Sellersburg Districts of the Indiana State Police responded to a single-vehicle crash on I-65 near the 35-mile marker near the Scott/Jackson County Lines.

The investigation by Trooper Seth Davidson indicated a 2005 International dump truck being driven by 62-year-old Robert L. Stidham, of Scottsburg, was traveling southbound on I-65 when the vehicle entered the median for an unknown reason.

The truck struck a guard rail before overturning, coming to rest on its side in the median of I-65.  Stidham had to be extricated from the vehicle by fire and EMS personnel.

Stidham was flown by medical helicopter to a Louisville hospital for treatment of serious injuries.

Investigators believe Stidham may have suffered a medical episode which may have been a contributing factor in the crash.

Both the northbound and southbound lanes of I-65 were shut down for approximately one hour for crash investigation and cleanup.