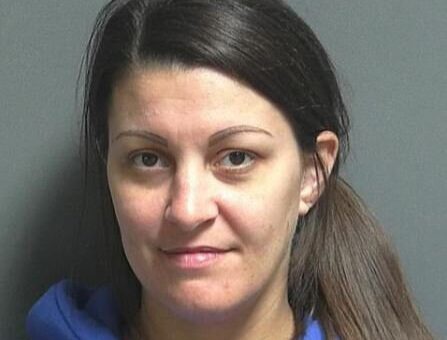 (LINTON) – A Sandborn woman was arrested after she got into a physical altercation with another woman at a Linton ballpark on Friday.

Linton Police officers arrested 33-year-old Jessica McCombs on a felony charge of battery resulting in bodily injury to a pregnant woman. McCombs posted a $1,000 bond on Monday and was released from jail. Her initial hearing is scheduled for Thursday, July 30, at 8:30 a.m. in Greene County Superior Court.

Officers were called to the ballpark on A Street Northeast after a woman said she was there with her children waiting on her ex-husband to pick up the children for a weekend visit. The woman told police her ex didn’t have enough seats for the children to safely ride in his vehicle. There was then a verbal altercation between the woman and her ex-husband’s girlfriend, Jessica McCombs.

The woman told police that while she was holding one of the children, McCombs grabbed her by the throat and pinned her against a vehicle.

The woman told police she pushed McCombs away, but wouldn’t fight with McCombs because she was pregnant.

Police noted in their report, the woman suffered red marks on the side of her neck.

McCombs told police she didn’t touch the woman, just knocked her sunglasses off. The ex-husband told police he heard the two women yelling but his back was turned and didn’t see the altercation.