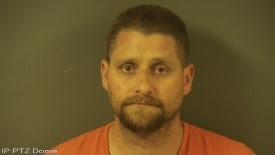 The investigation, which began in early June, developed information alleging Long was trafficking suspected Suboxone into the Putnamville Correctional Facility.  Long was arrested without incident about 10:50 p.m. on Monday at his residence in Brazil.  Long was later transported to the Putnam County Jail on three counts of conspiracy to traffic and one count of official misconduct.

“Trafficking of drugs into a correctional facility is a serious crime and won’t be tolerated,” Warden Dushan Zatecky said.  “This places other correctional officers and offenders in danger and threatens the safe operation of any correctional facility.”  Warden Zatecky concluded, “I appreciate the partnership our Correctional Police Officers have with the Brazil Police Department, and the Clay County Sheriff’s Department, who helped with this investigation. This should serve notice that trafficking will not be tolerated, and anyone, be they an employee or visitor, will be investigated, arrested, and prosecuted to the fullest extent possible.”

Long had been employed with the DOC since August 2019 and most recently worked at the Putnamville Correctional Facility.  As a result of this arrest, he will be placed on unpaid leave, pending termination of his employment.