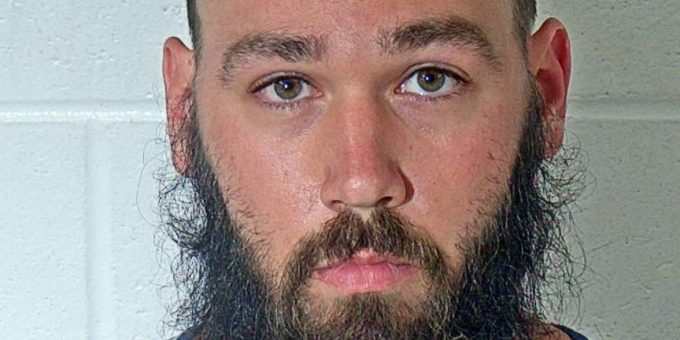 (MITCHELL) – A Mitchell man was arrested on a warrant Friday night after Indiana State Police investigated a complaint of unsafe shooting in the area of 2220 block of VFW Road on Monday, July 6, 2020.

According to a probable cause affidavit filed by Indiana State Trooper Robert Whyte, when he arrived at the home around Noon he made contact with a man who reported his neighbors to the west of his home were shooting high powered weapons and possibly Tannerite directly at his house and other surrounding residences.

The man told the trooper that for the past two months his neighbors at 2266 VFW Road have been shooting 4 to 5 days a week for hours at a time usually around the hours of 1 p.m. until 8 p.m.

The man told Trooper Whyte he went and spoke to those shooting about their unsafe practice and the noise. The man said they were shooting rifles, handguns, shotguns, and Tannerite. He also said he does not feel safe with his children playing in the yard due to the unsafe shooting.

He advised their “shooting range” is on the edge of their property in an empty field that those shooting do not own.

Trooper Whyte and Trooper Cox went to speak to those shooting the weapons.

When the troopers arrived they found two men on the front porch and asked to speak to 29-year-old Jason Russell.

Russell assured the troopers he was shooting safely and only shooting a .22, shotguns and rifles. The trooper then asked to see the shooting range.

Troopers estimated the total length of the range to be 25 yards. The backstop is a hay bale with some dirt on top of it that’s barely taller than the targets. The targets are on the furthest east portion of the property line right on the fence to the pasture. They said they thought they were shooting in a safe way. They also noted they are in the county so they are going to continue to shoot. They admitted to officers that even if they miss the targets the bullets will go into the empty field so it was like a double backstop. They advised officers that the empty field was not their property.

The troopers then asked them if they ever shot when the cows were in the field and they said no. They also told the troopers that if there was a ricochet onto the other property there were trailers and objects on his property that could stop the bullet before it got to the house.

While leaving the property the man renting the pasture stopped them and reported he did not like the Russell’s shooting onto the pasture and he is
afraid one of his cows could be hit.

Both troopers agreed that if they lived at the complainant’s home they would not let their children outside because of safety concerns.

Both troopers did not see a residence directly behind the “range” however if the Russell’s were to miss the targets anything more than probably 40 degrees to either side, it would strike a home or outbuilding. They also determined that if they shot above the target any distance it would 100% go onto the open field pasture.

Around 3 p.m. Trooper Whyte contacted the complainant to report he was forwarding the information to the Lawrence County Prosecutor’s Office.

The complainant told Trooper Whyte that about 30 minutes after he left Russell’s home they started shooting again.

A warrant was issued a warrant for Russell’s arrest for criminal recklessness.