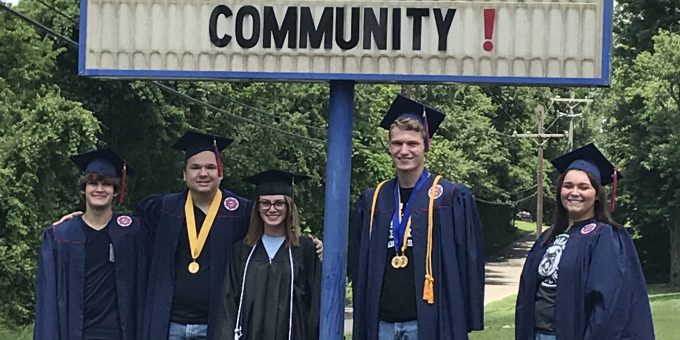 On January 6, 2020, officials with North Lawrence Community Schools voted to close Fayetteville Elementary just 13 years after the new facility was built. In addition, they also decided they would not keep the Heltonville, Springville, and Stalker elementary school facilities open.

The Fayetteville facility is a modern school building constructed with the intention of keeping utility costs down, with built-in modern energy efficiencies to facilitate that goal.

On Saturday, former students of Fayetteville elementary school visited the school to reflect on the past and take the necessary steps to move on to a brighter future.

Community is not the building itself; it is the people inside the building that create a sense of community. However, the building gives people the space to make connections and forge lasting legacies.

Several schools have been dotted throughout Indian Creek Township over the years. Many of these schools started humbly as a one room classrooms. Many recall how these school buildings were used to educate future doctors, lawyers, farmers, and other local employees.

At one time just one or two school teachers were dedicated to teaching these students the knowledge needed to help change the world. In previous years, Fayetteville had all grade levels rolled into one facility.

Students and teachers recalled the good times and memories shared in the old Fayetteville School that was torn down in order to make room for a new facility which was then replaced by the 2007 version.

Kindergarten and fifth grade students were handed their diplomas knowing they will be continuing their education at another location.

Some families have chosen to move to other school corporations. Others have chosen homeschooling. Attending Dollens or Parkview School remain options for these families as well.

Although there is some sadness amongst both teachers and students, the students have learned that no matter what adversity they may face, they can still endure the hardest of times by knowing they have the knowledge, skills, and resilience to face life head-on.

“This is the best school in the whole district,” said Tracey Watson, who brought her children Samuel and Sienna to the open house on Saturday.

Indiana test scores show the proof of Tracey’s statement with Fayetteville claiming some of the best scores within the North Lawrence Community Schools Corporation.

“I have good feelings about where our kids will land. We have some amazing young men and women in our building and we have prepared them for whatever life hands them.”