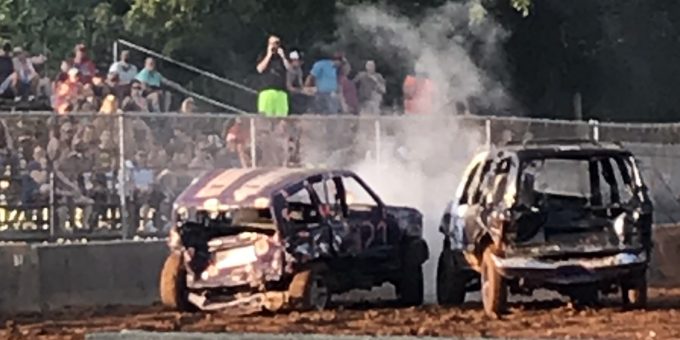 (LAWRENCE COUNTY) – The Demolition Derby Saturday evening brought some fun and excitement to the crowd gathered at the Lawrence County Fairgrounds.

Many noted that this event was a needed stress relief since most events have been canceled due to COVID-19 safety restrictions and regulations. Attendees said they were ready for something different and best of all the event took place outside in the summer air.

“It just means a lot to me to come out and watch my grandson take part in this event,” said Bill Pless of Bloomington.

Andy Hicks was ready to win Saturday’s event. Hicks had just competed in an autocross race in Martinsville. His ‘Rack Attack’ car was seen getting attacked in his feature. But win or lose most drivers say they simply enjoyed getting out and have fun racing.

Andy McKnight was glad to be able to put on an exciting event for the community. “I am thrilled with the turnout and community support. It turned out better than I expected,” said McKnight.

“I was a little disappointed in how I performed, but it was still fun,” said Samantha Simons, of Indianapolis, who took part in the fun and thrills of the derby.

The event did draw a nice crowd of people who cheered, clapped, and roared at the beats and bangs of cars hitting one another.