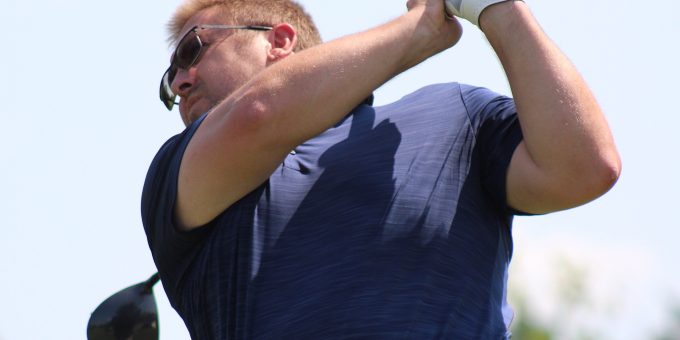 BEDFORD – Some like it hot. Aaron Harrell, with the heat on during the final round of the Bedford Men’s City Tournament, never broke a sweat, not even as the heat index reached the boiling point on a sultry Sunday at Otis Park.

Some feel the heat and decide they can’t go on. Harrell decided to light the fuse on his golf game and torched the back nine, burning the competition as he consumed the field and blasted his way to another City championship.

Hot? Harrell fired a final-round 65, including a blazing 30 on the second side, to win his third consecutive title and fourth overall. He joined elite company, only the eighth to win four and the sixth to record a threepeat, with a spectacular conclusion and four-round total of 9-under 279.

Harrell could feel the heat, pushing him and punishing everyone. Nobody was immune to the blast furnace of a mid-July oven day. Rather than melt, he solidified his grip on the crown with a sensational back-nine flurry of birdies to pull away from hard-charging Ethan Stanley and scrambling Jansen Perdue by 8 strokes.

Twice his lead was whittled to two shots. Each time, Harrell just turned up the heat until he fried them all. Five birdies on the back nine, including four in a five-hole stretch, were more than the contenders could bear.

During the three previous rounds, when Harrell started with flames but fizzled out on the back, he had limped home, tiring a little. Not this time. He needed only 12 putts during his final tour of the back. The putter, which he had grumbled about, was again his best friend. Cool, that stroke was.

“I made some putts,” Harrell said. “The difference was putting. I made some good ones coming in. That was really good.”

As Harrell went to the back, Stanley (the author of his own 65 in the third round, thanks to a swing-change epiphany which elevated him from the lower flights to the next-to-last group) was spewing his own flames. Stanley got to 6-under on the day, just two shots back, as he went to the 14th hole. Behind him, Harrell was about to erupt.

On the short 13th hole, Harrell unleashed a bomb drive that ended just short of the green, and his pitch almost found the cup. That was a birdie. On the 14th, Harrell zipped a wedge to 15 feet and drained it. That was another birdie.

On the downhill 16th, after a scuffed iron off the tee, Harrell lofted a wedge to 6 feet. Another birdie. And on the par-5 17th, after his second shot found the green-side bunker and he blasted out to 25 feet, he curled in his longest putt of the day. That was too much.

Meanwhile, Stanley had finally faltered with a double-bogey on 14. He concluded with a sizzling 68, which meant he played the second weekend in 11-under. And even that wasn’t enough.

“I knew it would take something really low,” said Stanley, who started the last round 5 shots back. “I’m not going to complain. I played really well this weekend.

“The mindset was playing my own game, staying patient. I knew, if I was going to win, it would take some help, no matter how good I played. So I was about hitting as many good shots as I could and not think about what was going on.”

Harrell was getting second-hand tidbits of Stanley’s heroics. He really didn’t want to know too many details.

“I didn’t know where I stood, which is the best way to play golf, honestly,” Harrell said. “You’re care free and trying to hit the best shots you can. It’s always great to see other people play well. Ethan had an amazing weekend. That was awesome.”

The other moments of drama came earlier in the day. Harrell carded his only bogey on the 4th, when his tee shot drifted right behind trees and his rescue punch didn’t work. For a brief period, even though he didn’t hit any of the first four greens in regulation, Perdue was within two shots.

“I don’t get too excited, don’t get too upset,” Harrell said of the momentary slippage. “Oh well. It’s not a big deal to make a bogey.”

That status changed when Harrell birdied the par-5 fifth, then hit two perfect, laser-guided shots on the 6th, the latter a 7–iron approach that never left the flagstick and settled to 4 feet for eagle on the par-5 sixth. That got him to the clubhouse in 2-under 35, and set the stage for the burning-down-the-house storm on the second side.

Perdue, who birdied the final two holes to finish tied for second, could only smile in appreciation.

“Considering the way I hit it, I’m happy I didn’t lose it,” Perdue said. “The best thing I had going for me for four days was my mind, because the swing wasn’t there. I just kept trying to hang in there and hoped to find something. But it didn’t matter. He played great and it was fun to watch. I just got beat by a better player.”

Michael Gratzer, who had the first-day lead and was still within range at the start of the fourth round, stumbled after his second shot sailed long into a hazardous area behind the fifth green and his tee shot on the 10th found a familiar fate. Ken Steward was fourth with a consistent total of 291 (featuring a 71 on the final day as his score improved each round).

“That’s very special, with everyone that’s won this tournament and the multiple-time winners,” he said. “Michael won it five times in a row. Any time you can win something once, it’s special. Let alone doing in three times in a row and four times total.”