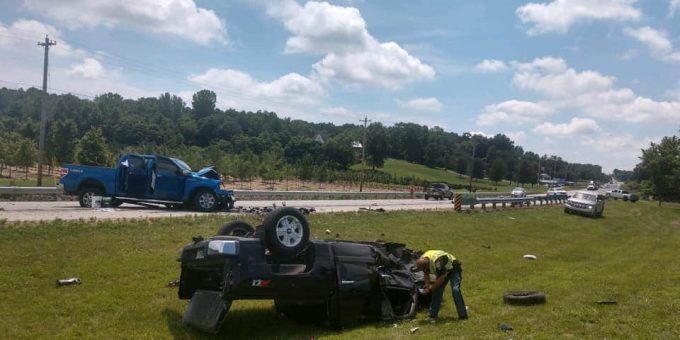 (SEYMOUR) – Indiana State Police are investigating a multiple-vehicle crash that claimed the life of a Seymour man.

On Friday, July 17, just after 1:00 p.m., Indiana State Troopers along with Deputies from the Jackson County Sheriff’s Office and Brownstown Officers responded to US 50 in front of Schneider Nursery near County Road 260 E to a report of multiple vehicles involved in a crash.

Upon arrival, responders found that five vehicles had been involved in the incident with several subjects receiving injuries.

The initial investigation by Trooper David Owsley along with the Indiana State Police Crash Reconstruction Team revealed that 81-year-old Herschel Williams, of Seymour, was driving a 2014 Ford F150 and traveling eastbound on US 50 when, for unknown reasons, his vehicle crossed the center line and struck the driver’s side of a 2018 Chevy Equinox driven by 45-year-old Brandy Schafstall, of Seymour.

A 2005 Chevy Equinox, driven by Haley Godsey, struck a guardrail while avoiding Schafstall’s vehicle that had come to rest in the middle of the roadway.

A 2001 Toyota truck was damaged by debris in the roadway while trying to avoid the other vehicles involved in the crash. Jackson County EMS transported Schafstall to Schneck Medical Center, where she was treated and evaluated for non-life-threatening injuries.

Zike and three other passengers in his vehicle were transported by Jackson County EMS for treatment of their injuries.

Herschel Williams was transported to Schneck Medical Center, where he was then pronounced deceased by the Jackson County Coroner’s Office. Herschel Williams’ family has been notified.

The investigation is ongoing at this time. Alcohol and drugs are not suspected to be factors.