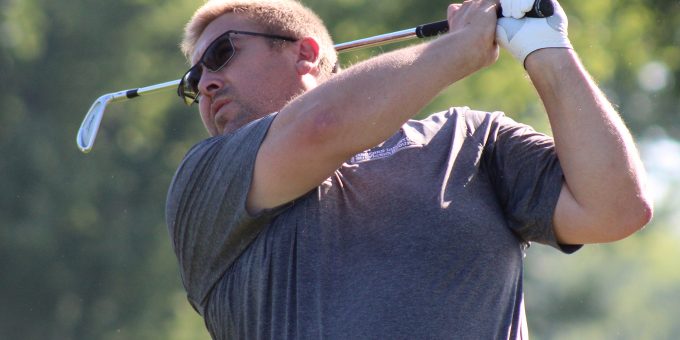 BEDFORD – On Moving Day, the common name for the third round of a 72-hole event, Aaron Harrell backed up the U-Haul and started loading another Bedford Men’s City Tournament championship trophy for his intended destination.

Harrell’s fast-start move was magnificent, four birdies on the first six holes en route to a 2-under 70 as he shouldered the weight of the overnight lead heading into Sunday’s final tour of Otis Park.

Harrell finished three rounds at 2-under 214, 3 shots in front as he seeks to pack away his third consecutive crown and fourth overall in the rich history of the signature tournament. This was more of the expected play – red numbers – from the man who destroyed the field with record-setting performances the last two years, rather than the pedestrian rounds of 72 he carded the first weekend.

Hey, even champions can wander through off days.

Harrell isn’t home yet, not in the stifling July heat and humidity, not without some pressure. There are still potential potholes, as he proved with his double-bogey on the 8th hole in Round 3. But the lead is a load more easily handled than unpacking a charge from behind.

“You always want to be in the lead,” Harrell said, having plenty of experience in that position the last two summers. “You can’t put your eggs in the basket of someone going backward, or you can’t push yourself forward. So being in the lead is best.”

Harrell, starting the day two shots behind first-weekend leader Jansen Perdue, made a brilliant, quick move in front with his early barrage. He posted birdies on the first and three straight on holes 4-6, the latter two with two-putt finishes on the par-5s. In about an hour, he went from hunter to the pursued.

Some ground was given back with the mistake on the 8th, a drive right leading to trouble, but he came back with birdies on 11 and 16, then slammed down a 15-footer to save par on the 18th and save momentum for the final round.

“I struggled with the putter but hit the ball well,” Harrell said. “That’s about it. It could have been better, but I’m very happy with where I am and what I shot.

“Nothing will change. I won’t change anything, just hit driver everywhere I can and try to play the best round I can.”

Perdue, who was busy keeping Harrell’s score and drawing a lot of circles around low numbers, started slow and moved down, especially after a double-bogey on the par-3 third cost him ownership of command. But he came back with birdies on 6, 7 and 10 en route to his 75. His three-day total of 1-over 217 kept him within striking range.

“That was a rocky start,” Perdue said. “Nothing felt good. I just had to grind it out. I was kind of lost, honestly. I was busy drawing circles on Aaron’s card, and I was just trying to find the clubface. I stayed with it.

“If I can just find the ball on the face, I’ve still got a good chance to post a good score. It’ll be tough, but I just need to post a number.”

While all that movement came at the top of the leaderboard, the biggest move of the day came from far back in the pack.

Former Bedford North Lawrence star Ethan Stanley, relegated to the First Flight lead with rounds of 78-76 the opening weekend, exploded with a 7-under 65 that included 8 birdies. He was bumped up into the Championship Flight for the finale with a three-day score of 3-over 219.

“I have been going through some swing changes, and I found something,” Stanley said. “I had good looks at birdie on almost every single hole.”

Stanley had two incredible hot streaks with four consecutive birdies on holes 5-8 and four in a six-hole run (11-16) on the back nine. His only bogey came on the 10th.