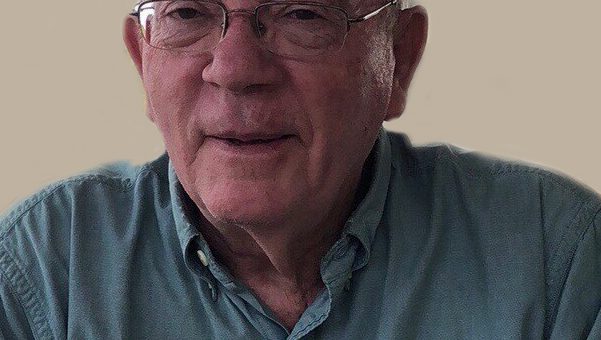 He is also survived by his fiancée Carolyn Colglazier, and a sister, Betty (Jim) Raney.  He also leaves behind a special nephew, Rex (Linda) Knight, and supportive in-laws, Randy and Rosabelle Knight, along with former daughter-in-law Rhonna Lawalin.   His brother, Gregg Roberts, preceded him in death. Eugene will be missed by a number of cousins, nephews, nieces, and a host of loyal friends.

Eugene began his working years at Trav-ler Radio in Orleans, where he found the girl of his dreams in Bonnie Simpson and never looked again for over 55 years.

After a brief stint working at Allison Transmission in Indianapolis, he spent six years at Loogootee Textile before completing a 28-year career at Naval Surface Warfare Center in Crane, Indiana.

Both Eugene and Bonnie were active in the life of the Huron Church of God for over 50 years.

There they both taught Sunday school classes, took part in Bible School, organized special events, and led youth groups.  Eugene led Bible Study and on occasion led the worship service, while Bonnie was president of the Ladies Missionary Society.   Both served on a number of other boards and church committees.

Following a day at work and continuing into retirement, Eugene and others were often found working to improve the community appearance and helping to give the residents a better quality of life.  As a charter member of the Huron Ruriton Men’s Club, he helped   clean vacant lots, build sidewalks, cut wood, and helped shut-ins with other tasks, and conducted youth programs.

Eugene was a charter member and the last survivor of the South Lawrence Water Corporation Board of Directors, serving as treasurer his first six years on the board.  He was serving in his 36th year as District One Director on the Orange County Rural Electric Membership Corporation Board, and he served as their appointment to the Hoosier Energy Generation and Transmission Board for 26 years, with 14 years of those as an officer.

Eugene was treasurer for the Huron Volunteer Fire Department for 20 years and was in his third term on the Spice Valley Township Advisory Board.  He had a long career working with Cub Scouts, Boy Scouts, and 4-H.  He served over 40 years on the Huron Cemetery Association Board and 20 years on the Waggoner’s Chapel Board of Trustees.

An avid sports fan, Eugene coached basketball at Huron Elementary School for three years and for the Mitchell Youth Program. He was baseball coach in the Mitchell programs for 15 years, coaching Biddy, Little League, and Babe Ruth.  For 20 years he covered high school sports and wrote weekly columns for The Mitchell Tribune.

A private family service will be at 10:30 a.m. Tuesday, July 21, in the Memorial Chapel of Chastain Funeral Home & Cremation Center with Pastor Doyle Henderson and Pastor Paul Kirby officiating.  Burial will be in Huron Cemetery.

The family will receive friends from 4:00 p.m. – 7:00 p.m. Monday at the funeral home.  Out of respective for the family and others, the family asks that COVID-19 policies be followed (masks will be provided).

A celebration of life will be held at a later date.