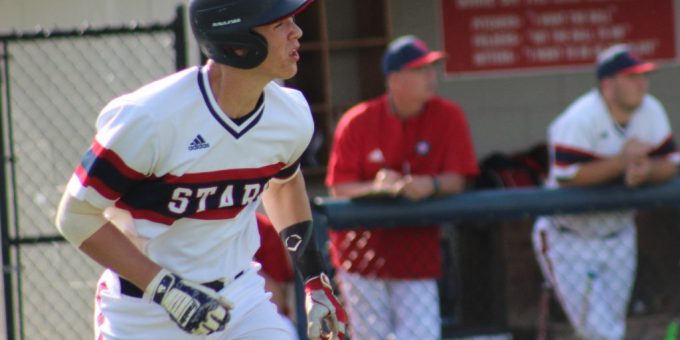 BEDFORD – When his father first asked young Evan Waggoner to don the catcher’s gear and squat behind the plate, his answer was emphatic: “No.” Darren won that disagreement, as dad’s usually do. Evan, perhaps under protest, tried catching.

Guess what? He liked it. He was really good at it. Score another point for Dad wisdom.

From reluctance to revelation, Waggoner is now one of the top catchers in the state, destined for the University of Evansville program following his verbal commitment on Monday afternoon. His decision ended a two-year recruiting process for the Bedford North Lawrence senior.

Even with the loss of his junior season with the Stars (the 2020 campaign was erased as the coronavirus took its toll in March and April), Waggoner was a coveted recruiting prize, a left-handed hitter with all the tools behind the plate and in the batter’s box.

As a sophomore, he hit .365 (leading the Stars with 38 hits and 24 bases on balls) with 1 home run and 19 RBIs. He also threw out 18 of 37 base runners attempting to steal and was named to the Hoosier Hills Conference squad.

This summer, as high school sports still hang in the balance, he’s been playing with the Indiana Bulls Black 17-U travel squad, competing in four tournaments and rekindling his love of the game.

“It was definitely a shock to the system, not playing baseball for a long time,” Waggoner said, “It took me a few games to get back in the groove with summer ball.

“I knew (the virus and its impact) would hurt me. All the visits and scholarship stuff were messed up, things that come along with recruiting. So this is a huge relief. When it started, it was just added pressure I really didn’t need. Now that’s it’s over, I can finally relax and just play my game.”

Waggoner chose the Purple Aces over other Div. I suitors and small-college pursuers. Evansville, under the direction of head coach Wes Carroll, had a lot to offer. In March, the Aces officially opened the renovated German American Bank Field, which now features a full turf surface, padded walls throughout the entire stadium, dugout and bullpen renovations plus a new scoreboard.

“There wasn’t a down side,” Waggoner said. “They have great academics, both majors I was interested in (engineering and actuarial science). They have a great head coach, a great staff, and I’m excited to work with them, develop physically and improve my thinking of the game.”

Waggoner is a cerebral guy. Catchers have to be. Whoever called the mask, pads and gear worn by those playing the most dangerous position on the field “the tools of ignorance” did so as a great disservice or one of irony. They call pitches, direct the infield defense and hold the fate of most games in their hands.

“I started loving that,” Waggoner said. “It’s being a leader on the field and being in on every play. There’s a lot more thinking that goes into it than any other position. You have to constantly be aware.”

Waggoner is a Cincinnati Reds fan who grew up with Joey Votto as his favorite. He displays two signed photographs of Votto in his bedroom. “I looked up to his positivity, how much fun he had playing the game,” he said. “Whatever he did, he didn’t things affect him.”

The Reds have had some great catchers in their history, most notably Johnny Bench of the Big Red Machine era. Waggoner hopes his college choice is the first step in following those footsteps.

“As far as I can go, see where it takes me,” Waggoner said.