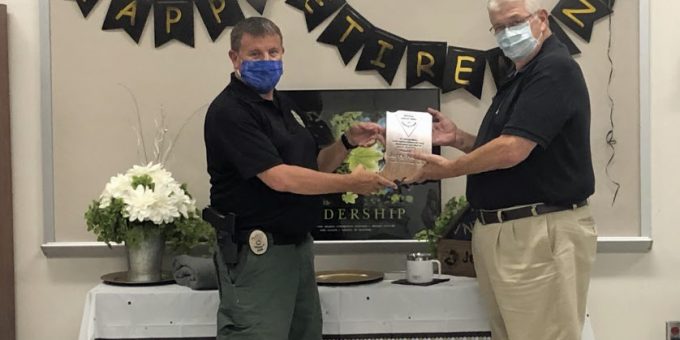 (ROCKVILLE)  – Rockville Correctional Facility (RCF) Warden Julie Stout and fellow her staff are pleased to congratulate Information and Intelligence Officer Jerry Newlin on his retirement after 45 years and nine months of faithful service to RCF and the Indiana Department of Correction (IDOC).

To truly understand Jerry’s journey it is helpful to take a look at where RCF was nearly 46-years ago.  The site had been a US Air Force Radar Base throughout the 1950’s having been abandoned in the early 1960’s.  The IDOC began leasing the property in 1970 creating a camp for incarcerated male juveniles.  Jerry Newlin joined the Rockville Camp in 1972 as a correctional officer who with other correctional officers,  supervised the 90 or so boys and 35 adult male offenders.  Nearly all of the adult offenders were serving life sentences, most of which participated in work crews that assisted with maintenance at Rockville and surrounding prison facilities.  The youth offenders participated in life programming to teach them a better way of life as well as community service events with the goal to alter their criminogenic path and build respect of self and others.

Jerry Newlin supervised the men and boys until 1979 when he took a two year hiatus from from his duties with the Dept. of Correction.  Returning to the Rockville Camp in 1981 Jerry picked up where he’d left off.  He was promoted to Correctional Sergeant responsible for supervising front line correctional staff and offenders.  In 1982 Jerry took on a counseling role as a Youth Group Leader where he worked directly with the youth offender programming guiding these young offenders in their paths to re-enter society.

In December of 1990 Jerry was promoted to Training Coordinator at the Rockville Training Center, as the facility was then known.  The following December he was appointed to Facility Investigator, a job he performed simultaneously with his Training Department duties.  In 2002 the IDOC standardized facility investigation operations throughout the Department and Jerry became a full time Internal Affairs Officer specializing in Security Threat Groups (gangs), and Custody Supervision.  He is certified in both of these fields through the American Correctional Association, the accrediting agency for all of Indiana’s prisons.

Jerry and his coworkers witnessed and helped transition the Rockville Camp into what is today a completely modern prison complex known as the Rockville Correctional Facility.  The major shifts included offender population changes that went from juvenile and adult male offenders to juvenile male and adult female offenders housed separately, but on the same grounds.  Eventually all the juveniles were moved to a separate location and RCF became a medium security adult female correctional facility.

The facility transition not only included changes to the offender population, but a complete overhaul of the grounds beginning in 1995.  Over the course of the next three years the entirety of the RCF footprint was replaced with modern prison housing units, and offender services buildings.  Jerry and his coworkers had started supervising less than 200 offenders in the early 1970’s and at the end of his career was helping supervise approximately 1,100 adult women.

Prior to Jerry’s career with the IDOC he served as a Parke County, Indiana Sherriff’s Department Reserve Deputy beginning in 1977, and from 2000 to 2003 served as the County Jail Commander.   He along with Sherriff Charlie Bolinger opened a new jail, and created policies and procedures.

When looking back on his career Jerry commented he’s most proud of the years he spent supervising the troubled youth offenders he had an opportunity to work with.  He fondly remembers those times being filled with the stress of ensuring case plans were built for the needs of specific offenders, and the necessary work was put in following up on the individual’s progress or lack there of.  Jerry spoke of youthful offenders he worked with in his early career who continue to reach out to him as adults to share their success stories and relive the good times and lessons learned as their lives moved forward.

As you might expect of a man like Jerry Newlin as he reaches this life milestone he’s not stopping, but just slowing down long enough to take a much deserved rest.  He will continue to serve his home community of Bloomingdale, Indiana as the President of the Town Board, and spend a lot more time with his grandchildren, Gabriella and Jarred, both accomplished high school athletes.