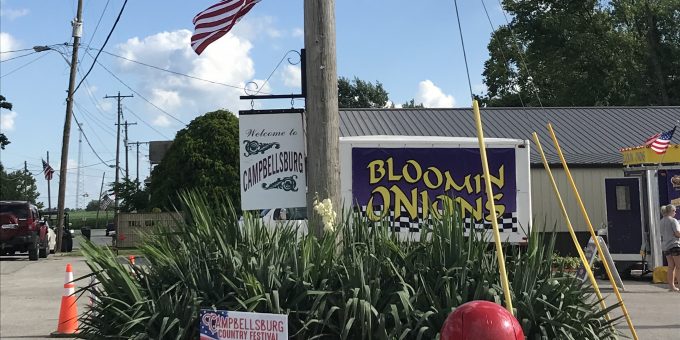 Friday evening was the start of this year’s festival with music, dunking booths, and food.

“We love to keep small town America alive. Small towns are now struggling with many wanting to move on to a bigger city life,” said Sue Bennett.

Sue Bennett has lived in Campbellsburg for 74 years. She graduated in the last class at the Campbellsburg High School. The school consolidated into the West Washington Community School District in 1963.

“I would love to see the younger generation start to get involved. And I believe we have a group of young adults who are now ready to step up,” said Bennett.

Luke Scott moved into Campbellsburg in March of this year, just after COVID-19 hit.

“The town just opened their arms to us. The local First Baptist Church members welcomed us to the community. So much that during the COVID-19 we was cooking baked apples and posted on Facebook this would all be better if we had some ice cream. Within minutes their was a knock at the door and a neighbor brought us the some ice cream,” said Scott.

Music on Friday night was provided by Mark Wilson who also plays at the Legends in French Lick. He played several country music songs with a good quality voice and soothing sound of acoustic guitar.

This was the first time for the rock music group 650 North to perform in Campbellsburg.

“We try to have different groups of entertainment every year. Usually playing country and rock music,” said Sue Bennett, organizer of the Campbellsburg Country Festival.

Estin Roop was announced as the winner of Little Miss Country Girl. Estin is the daughter of Josh and Kim Roop. She is in the fifth grade. Her hobbies include basketball, dance, arts/crafts, swimming, and spending time at family gatherings.

Abby Chanley was announced as the winner of Miss Country Girl. Abby is the daughter of Josh and Asia Chanley. She is in the ninth grade. Her hobbies include drama club, and cheer.

Erica Worley was announced as the winner of Junior Miss Country. Erica is the daughter of Eric and Christina Worley. She is in the seventh grade. Her hobbies include basketball, volleyball, and doing makeup.

There was a dunking booth available to try and dunk some volunteers who needed to cool off from the July heat.

The whole weekend is packed with lots of other activities from the pancake breakfast on Saturday morning to parades, and other contests with more music and entertainment to complete the fun filled weekend.