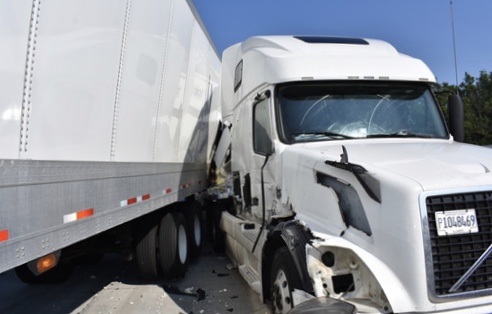 (SEYMOUR) – On Thursday morning at approximately 9:30 a.m., Indiana State Police responded to a two-vehicle crash on I-65 in Jackson County that claimed the life of an Ohio man.

The initial investigation by the Indiana State Police-Versailles Crash Reconstruction Team indicated that a 2001 Volvo tractor trailer, driven by 41-year-old Daniel Cosma, of North Royalton, Ohio, was traveling southbound on I-65 near the 53-mile marker, just north of Seymour.

Cosma apparently had a mechanical issue with the Volvo truck while driving in the I-65 construction zone.  He stopped the truck in the right lane of I-65 due to there not being a shoulder in the area.

While stopped in the roadway, Cosma’s trailer was struck by a 2015 Volvo tractor trailer driven by 31-year-old Donald Nicholl, of Decatur, Georgia.  The impact forced Cosma’s vehicle into Cosma, who was outside of his vehicle working on his truck. Cosma suffered fatal injuries in the collision.  He was pronounced deceased at the scene by Jackson County Coroner Michael Bobb. Nicholl was not injured in the collision.

Alcohol and drugs are not suspected to be factors in the crash although toxicology results are pending at this time.

The Southbound Lanes of I-65 were closed for nearly four hours for crash investigation and cleanup.