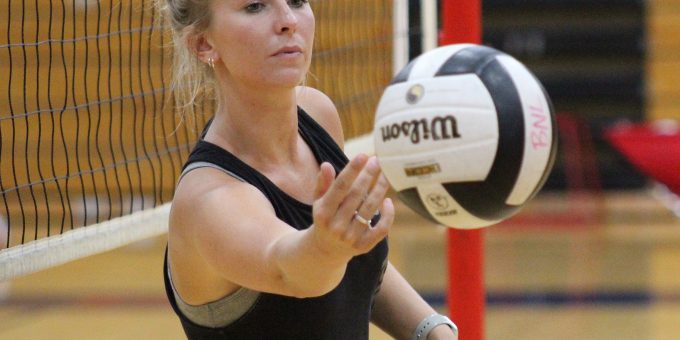 BEDFORD – Surrounded by constant swirls of negativity, new Bedford North Lawrence coach Gabrielle Arthur is a beacon of hope and enthusiasm. Oh, to be young, with the optimism of a beautiful future, forever.

Arthur will not allow her outlook to fade, her joy to wane. She waited three months for this week, her first with the Stars under her command. She was hired to guide her alma mater in the early stages of the current coronavirus epidemic, and the initial meetings were all virtual.

Even for a tech-savvy 23-year old, this was so much better. BNL Fieldhouse buzzed with activity, the sounds of thumped volleyballs and thrilled athletes rippling across the hardwood. Arthur was a super-charged battery with a positive charge.

“There’s nothing like being in the gym and being face to face with everyone,”Arthur said. “I couldn’t wait.”

The wait, as the IHSAA finally allowed practice and conditioning sessions in July, was worth it as the Stars gathered to start making up for lost time and look ahead to the first week of official practice for the 2020 season.

Will that happen? Wait, that’s a negative outlook. Arthur won’t worry about what might transpire. Her focus, her energy, her vision is singular. What can she control? Her preparation.

“I try not to emphasize the negative,” she said. “I try not to bring up the possibility of the season not happening. I’m enforcing that we’re here 2 1/2 hours, that’s what we know right now, and we’re going to work real hard and get what we can out of it. Don’t put doubts in their heads, let them focus on the positive stuff.”

“The girls came in here with so much energy,” Arthur said. “I thought we would be a little behind, but I couldn’t believe it. They looked like they had been playing all summer. I really like that we have multi-sport athletes. They’re playing sports year round, so it’s not like I have to worry about them being out of shape.”

And to emphasize that point, Arthur has instituted a revamped weight-training program. She had hoped to start that when she was hired, but could only discuss it via Zoom meetings. Now, with the season looming, the skills need sharpening as much as the muscles need defining.

Even with all the positive reinforcement, some realism is necessary. BNL went 4-22 last year but lost no seniors. And the virus reminders are ever present; social distancing, no water fountains, self-report symptoms.

“It doesn’t worry me because of the precautions,” BNL senior Haley Deckard said. “We’re doing everything we’re told to do.”

The worst part of the virus rules? No high-fives, no hugs. Volleyball is a sport of momentum and emotion. Containing the urge to embrace a teammate after a quality play is difficult. It’s part of the camaraderie Deckard missed most.

“Most of all, I missed the girls,” Deckard said. “There was some communication, but it’s totally different being together. Being able to hug is not allowed, but we’re working our way up.

“We don’t want to lose this. I look forward to volleyball season the most. I’m still getting a little nervous about that. I don’t like to watch the news at all, because a lot of stuff can run through your mind. It’s all what-ifs.”

Advice? Turn off the television, stay off social media, concentrate on the positive. Arthur, a 2015 BNL grad who played three seasons at Franklin College before returning last year as an assistant, is eager to complete this month of workouts before the official start of tryouts and practices for the fall campaign on Aug. 3.