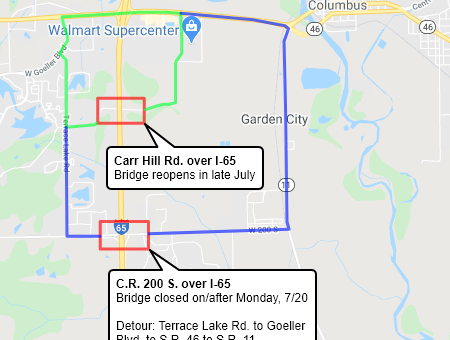 (BARTHOLOMEW CO.) – Nightly lane closures are planned next week on I-65 near Columbus as Indiana Department of Transportation contractor Milestone Contractors continues bridge work at Carr Hill Road and prepares to begin work at C.R. 200 S. Both bridges are part of a nearly-$5 million superstructure replacement contract that began earlier this year.

Starting Monday night (July 13), alternating lane closures will be in place on I-65 between MM 64 and MM 68 while crews remove and transport existing barrier wall and equipment at each work site. Nightly lane closures are scheduled to take place between 9 p.m. and 6 a.m. through Saturday morning, weather permitting. Crews will also begin guardrail installation on Carr Hill Road, which is expected to reopen in late July.

On or after Monday, July 20, Milestone will close C.R. 200 S. over I-65. Demolition work is planned to begin that night, resulting in intermittent stoppages on the interstate, also between 9 p.m. and 6 a.m. Traffic will be stopped for up to 20 minutes at a time while overhead demolition work is in progress. Demolition is expected to take approximately one week. Motorists are encouraged to utilize an alternate route or allow extra travel time to avoid delays.

Motorists are reminded to slow down, use extra caution and drive distraction-free through all work zones. All work is weather dependent.