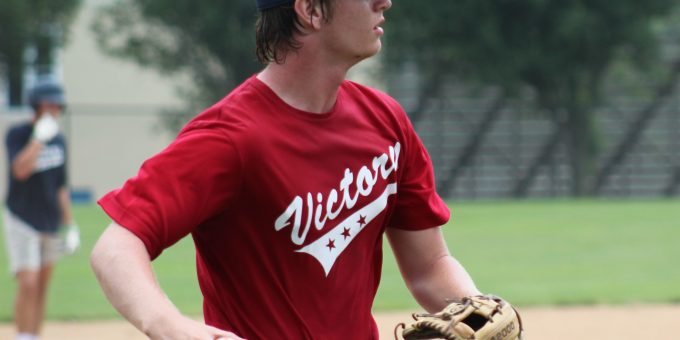 The approaching, electric clouds were rather appropriate as BNL baseball wrapped up two hours of practice. Four months earlier, the perfect virus storm had exploded and washed away an entire season.

That tempest came without warning. At least this time, the Stars could tell what was happening.

Baseball is back, at least on some level. Travel teams are active once again, even though the major-league stars are still idle, the usual money bickering creating more animosity and acrimony. The teenagers that sweat through the workout at BNL Field have already paid a price.

They sat out the entire 2020 prep season. Not by choice. So when the IHSAA announced its approval of July workout sessions, they were eager to jump off the couch and dig into the dirt.

“It feels great, to be able to play again and compete after sitting on the sidelines,” BNL senior Aden Pemberton said. “I thought I would have to sit out even more.”

The boys of summer couldn’t be happier. The thump of the bat, the slap of a leather glove, the chatter from the infield. Music to most.

“It‘s almost like new life is into them,” BNL coach and athletic director Jeff Callahan said. “Maybe we’ll be able to have high school sports. Who knows? It could be next week and they shut it down. Or we might get through it.”

Indeed, the clouds of COVID-19 still loom, casting a shadow of uncertainty. BNL won’t play a real game until April of 2021, which is nine months (or maybe an eternity) away.

While nothing can be done about the erased season, which cost last year’s senior class some of the innocence of youth and the closure of their careers, hope still remains for the future. BNL will likely have 10 seniors on next year’s roster, plus two large underclass groups. They needed to get back in baseball mode. Success in this sport require timing and repetition. The Stars, like so many others, need to tune both.

“I didn’t get to see the sophomores play last year as freshmen, and there’s a good-size group of freshmen coming in,” Callahan said. “A lot of them play travel ball, which has been going for about a month. And you can see the ones who have done that, you can see the ones who haven’t because it’s been since March that we’ve done any baseball stuff. You can definitely tell. We need to get back into it.”

The practice sessions, even for an outdoor sport, are conducted within the same framework as indoor activities. Social distancing, self-reporting of sickness symptoms, common sense are all keys to keeping what has been restored so far.

“They’re all on the same page as far as what the other teams are doing,” Callahan said.

The virus still dominates conversations and thinking. But on the diamond, for two hours, they escaped. They were kids again. Baseball can do that.

“We’re all out here trying to get better,” Pemberton said, who was moving freely without the knee brace that had been a familiar sidekick following the surgery that cost him two sports last year. “We’re kind of over it after sitting at home for so long.”