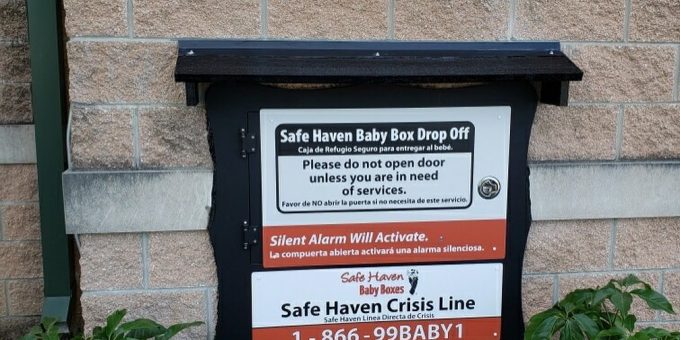 Baby boxes are climate-controlled, ventilated boxes installed in the walls of hospitals and fire stations where parents can surrender their infants who are no more than 30 days old without having to personally pass them over to emergency personnel or provide any identification of themselves.

When a baby is placed in the box, a delayed silent alarm is triggered alerting firefighters in the station that the door was opened and a baby was placed inside. The alarm also alerts Monroe County Central Dispatch just in case firefighters are not at the station so another emergency provider can pick up the baby.

The door on the outside locks upon closing, and emergency personnel receive the infant from inside the building. Emergency personnel then bring the infant to the nearest local hospital for examination, after which the infant is passed on to children’s services officials for further adoption procedures.

An infant is usually adopted within 30 days after being surrendered,

The baby box’s installation was the result of a community effort led by Eric Powell, co-owner of the Funeral Chapel.

In May 2018, Powell was the Monroe County coroner on call that was called to an abandoned apartment in Bloomington after a 26-week-old baby was found dead. With his wife LeeAnna Powell, he arranged a burial service for the baby, whom they named Sarah.

Once the Powells learned about Safe Haven baby boxes, they decided Bloomington needed one and planned to have one installed in Sarah’s memory. With the help of a couple from their church, Sherwood Oaks Christian Church covered the full $10,000 service fee.