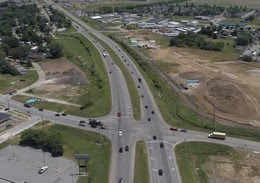 (MARTINSVILLE) – Another long-term road closure is beginning in Martinsville to rebuild and realign Mahalasville Road in preparation for major I-69 interchange construction next year. Mahalasville Road south of State Road 37 is closing to through traffic today. The closure is expected to continue through fall.

Mahalasville Road will be closed to all traffic between the 90-degree curve just south of Gardner Lane and Country View Apartments. Click here to see a map of the area. Gaps in barricades south of S.R. 37 will provide access to Gardner Lane and nearby properties for local traffic.

Commercial Boulevard is also closed for ongoing reconstruction and realignment. When completed, access will be restored between Industrial Drive and Gardner Avenue

Crews are rebuilding and realigning Mahalasville Road and nearby drainage to make room for a future I-69 interchange. Click here to see an aerial map of planned improvements.

I-69 Finish Line crews are back at work after the long 4th of July weekend and continuing construction throughout Martinsville and northern Morgan County. Much of the work in Martinsville this year is to prepare for next year’s temporary closure of a portion of S.R. 37. A nearly 5-mile section of S.R. 37 will close between S.R. 39 and Morgan Street for most of 2021.

This map shows the area that will be closed and detour routes. Crews are working this year to make improvements to alternate routes including S.R. 39. Portions of S.R. 39 are being widened to four lanes and crews are rebuilding S.R. 37 south of S.R. 39 to carry traffic during the closure.

Other improvements being made include repaving, intersection modifications, and temporary signals. The changes are designed to safely move more traffic through the alternate routes during next year’s closure.

The full closure means that crews will be able to work faster and in a safer environment. Drivers won’t have to adjust to changing traffic patterns and crews will have the room they need to rebuild the roadway and improve it to interstate standards in less than a year.