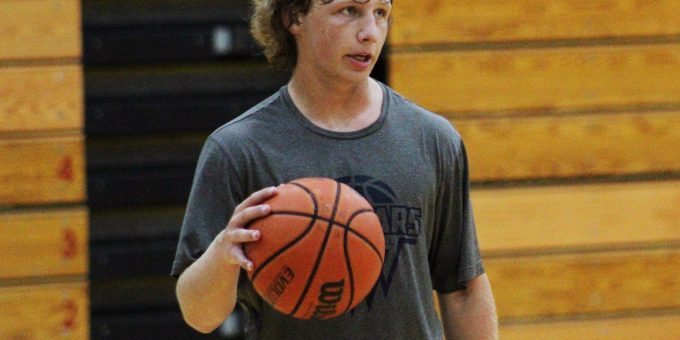 BEDFORD – The signs of the times are everywhere, posted in unmissable, eye-level locations. “Social Distancing.” “Any Symptoms of COVID-19, Please Stay Home.”

With safety precautions in place, with a virus and its consequences lingering like an unwanted house guest who quickly overstayed the welcome, high school sports returned on Monday at Bedford North Lawrence.

Under the guidelines mandated by the Indiana High School Athletic Association, the state authorities and health supervisors, practice sessions are now allowed. At BNL, boys basketball was the first program to take the first steps back toward normalcy as 38 athletes attended the two-hour voluntary workouts in BNL Fieldhouse.

After months of silence, save for the constant conversations centering on recent events, the sounds of youth could be heard. Bouncing basketballs, squeaking shoes on hardwood, a coach issuing instructions. Music to many ears.

Almost every sport will follow suit this week as coaches start the process of making up for lost time. While nothing can recover the erased spring sports, victims of the widespread cancellations, these are important days to reintroduce the routine of preparation and the start of planning for the upcoming seasons.

“It was nice to get in here, just to see the kids more than anything else,” BNL coach Jeff Hein said. “I hadn’t seen them in four months.”

Much has transpired since the happier, carefree days of early March, when the Stars were eliminated by Jennings County in the sectional semifinal at Seymour. Restrictions and reactions wiped out the remainder of the boys basketball state tournament. BNL lost leading scorer, rebounder and playmaker Brayton Bailey to gradation and freshman Colten Leach to postponed knee surgery. Playgrounds were deemed off limits and rims removed.

“I missed it a lot, just being around my friends and playing basketball,” senior Jackson Miracle said. “Just my team. I love all of them.”

“I just shot at my house,” senior Kooper Staley said. “This is exciting. There’s a little catch-up, but it’s basically back to normal.”

Normal, except congregating in groups is forbidden. Stay 6 feet apart. Don’t dare cough. Drinking fountains are covered and off limits. Don’t share basketballs during drills. Despite the new rules, the Stars made it work.

“I just want to get up and down the floor,” Staley said.

There’s some old-school feel to it all, to the days before travel ball overwhelmed the summers and workouts were structured. Get better on your own. Some of the returning players have done that. They didn’t look like they had grown roots on the couch for 16 weeks.

“Everyone is not in shape,” Miracle said. “After June, we’re usually in shape to play basketball. At this time, we’d be playing for three hours. It was a lot harder today.”

“I was pleasantly surprised at the shape they were in,” Hein said. “You feel like you’re behind the eight-ball. It wasn’t as important this spring as it was last year, when I was a new coach and had to get some stuff in. June was a missed opportunity to play games, and I believe last year June was a lot of the reason of the success we had (15-10) because we had a good month, getting to play opponents and learn about ourselves, what was going to work.

BNL did have new faces with the incoming freshman class and the return of Aden Pemberton, who missed all of last season with a knee injury. The Stars will practice twice each week for the next two weeks, then see what is allowed during the third week before July winds to a close.

“We’ll play it by ear,” Hein said. “Who knows what will happen? It’s hard to plan. Usually we’re having practice time and preparing to play opponents. Now there are no opponents to play until November. You have to take a different approach.”

The approach revolves around safety and sense. The invincibility of youth never wanes, but the impact of current issues has not been lost on them as they celebrate this latest step back to their former world.

“I’m not nervous,” Miracle said. “But everyone has to be safe. I understand that.”