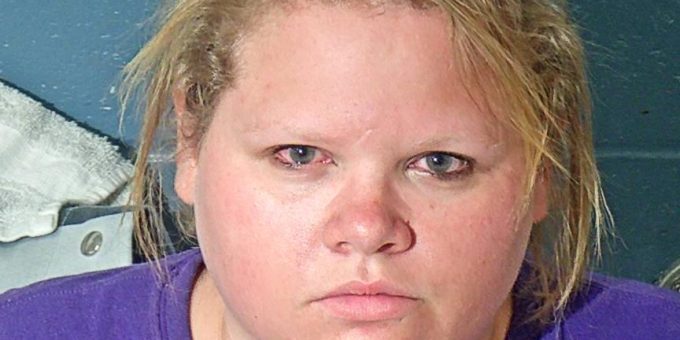 According to a probable cause affidavit, on June 29 at approximately 3:46 a.m. Lawrence County Sheriff’s Department dispatch received a call from a female motorist saying her name was 30-year-old Amanda Brock and she was lost and she couldn’t drive because “the trees have legs” and people are jumping out of them and surrounding her car.

Capt. Troy Lobosky found her blue Chevrolet Colorado in the area of the 250 block of West Pleasant Run Road facing north in the southbound lane. Brock was in the driver’s seat. The front passenger side window was down on the vehicle and Brock had her cell phone to her ear.

The officer asked her to step out of the vehicle and told her to roll her window up because it was beginning to rain.

Brock told the officer she couldn’t roll up the window because her kids were in the vehicle.

Brock told the officer she had been at a “little get together” somewhere she had not been before and got lost using her GPS and ended up in her current location but didn’t know how. She said that as she drove around the corner several kids in costumes starting popping out in front of her vehicle and then other individuals were blocking it with their arms out where she couldn’t get through. She said ghosts were jumping out in front of her children causing them to scream and said it was unacceptable.

Capt. Troy Lobosky asked how old the kids are and she said they were 4 and 6.

Capt. Lobosky told Brock he wanted to speak to the children. When he opened the rear passenger side door he found no one inside.

Brock told police she was two years sober and didn’t have anything to drink.

Capt. Lobosky was concerned about Brock’s hallucinations and not knowing where her kids were.

“I asked where she lives and she said she lives at Oolitic Manor apartments, but she was on her way to check on her grandmother who lives behind Holt’s (Grocery) in Judah,” wrote Capt. Lobosky.

Brock continued to believe her kids were in the area and continued to call for them and said she was “a good mom now.”

Capt. Lobosky then asked if the kids could be at her apartment or with her parents.

Capt. Lobosky then had Brock call her mother. She did not have the children and began calling around to see if she could find them.

While on the phone, Brock received a text message from a male saying he had ‘zanny bars’ and that Brock had requested getting Adderall, but she denied it saying she asked for someone else.

It then began to pour down rain, so police had Brock’s vehicle towed and she was transported to the sheriff’s department.

While sitting in the police car, Brock continued to hallucinate, mentioning someone was in the seat next to her and saying she had stepped on a little girl getting out of her vehicle. She said the little girl was under her door when she opened it.

Brock’s mother called back and said she was going to Brock’s apartment to check if the children were there.

Police found a digital scale and a baggie containing a crystal substance that tested positive for meth in Brock’s purse.

Brock said if there were any drugs in her purse they were put there by Amanda Little in order to frame her.

Police then spoke to Brock’s mother again who told police she could not locate the children.

“Amanda was unable to remember where or whom the kids may have been
left with,” Capt. Lobosky wrote. “We posted a public request on social media with their picture and waited for responses while additional day shift officers went back to the general location where she had been located and to the area of the Oolitic Manor Apartments to search for the children. A call was made to the DCS Hotline and made a report into the missing kids as a result of the mother’s actions.”

The children were finally located safe.

Brock was arrested on charges of operating a vehicle while intoxicated and possession of meth.