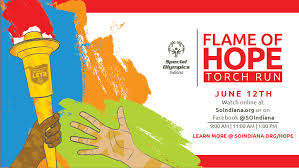 (CARLISLE) – The Indiana Department of Correction (IDOC) joined in the Special Olympics of Indiana’s Flame of Hope Torch Run to show their support for what the organization does to raise money and awareness for Special Olympics athletes.

Wabash Valley Correctional Facility (WVCF) has been a huge supporter of the Special Olympics for several years. WVCF’s team included IDOC Executive Director Richard Brown, Emergency Response Operations (ERO) Sergeant Elise McDaniel, and WVCF Correctional Officer Cory Orndorff.  The three met at Sullivan City Park to film a five minute video showing the torch being passed.  The video ended with the team sharing a few words of encouragement with the athletes.  Numerous videos were taken and combined to create an online event on June 12th for the athletes and their supporters.  The video was generated to inspire hope and bring joy to Special Olympic athletes across Indiana.

Executive Director Brown stated, “It was an honor to participate in the Flame of Hope Torch Run and show support to the Special Olympics athletes.  Hopefully the video encourages them this year, since they cannot come together for the Summer Games.”