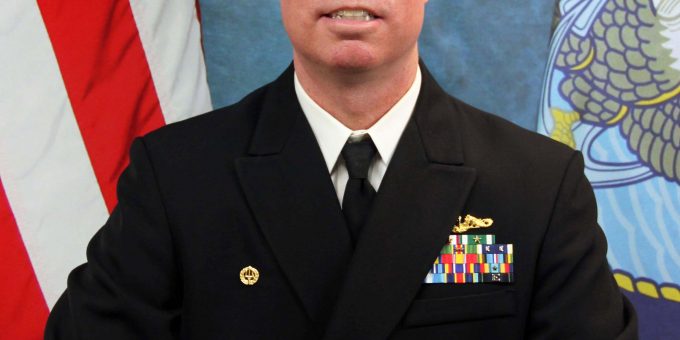 “It is an honor to lead the expert workforce at NSWC Crane,” says CAPT. McKay. “Crane is recognized for their technical expertise and support of the fleet in Strategic Missions, Electronic Warfare, and Expeditionary Warfare. I am thrilled to lead such a dedicated workforce who ensure the rapidly evolving needs of the warfighter are met every day.”

Capt. McKay is a native of Tampa, Florida, and has a 24-year naval career. He was commissioned an Ensign in 1996 after completion of Officer Candidate School and assigned to the fast-attack submarine USS ALEXANDRIA (SSN 757) in 1998. His tour included deployments to the North Atlantic Ocean, Mediterranean Sea, and the Persian Gulf.

In 2001, Capt. McKay reported to COMMANDER SUBMARINE SQUADRON ELEVEN (CSS-11) in San Diego, California as the Battlegroup Operations Officer. While assigned to COMSUBRON ELEVEN, Capt. McKay was accepted for lateral transfer to the Engineering Duty Officer Program and departed for graduate school in 2003.

He reported to Portsmouth Naval Shipyard in 2006 and worked on various projects and in multiple positions repairing, overhauling, modernizing, and inactivating nuclear-powered submarines. In 2009, Capt. McKay reported to the Deputy Commander, Logistics, Maintenance, and Industrial Operations at Naval Sea Systems Command at the Washington Navy Yard. While there, he served as the military deputy for submarine maintenance.

Capt. McKay served as Repair Officer on the forward-deployed submarine tender USS EMORY S LAND (AS 39) from 2012 to 2013, performing deployed maintenance on US and foreign vessels in the 5th, 6th, and 7th Fleet Areas of Responsibility. In 2013 he reported as Repair Officer to Naval Intermediate Maintenance Facility, Pacific Northwest in Bangor, Washington, overseeing maintenance for seven homeported SSBNs. In 2016, he was assigned as the military deputy for the USS RONALD REAGAN (CVN 76) Selected Restricted Availability in Yokosuka, Japan.

In 2016, Capt. McKay reported to Portsmouth Naval Shipyard as the Production Resources Officer (Code 900) and has been serving as the Operations Office. (Code 300) since 2017.

Capt. McKay holds a Bachelor of Science in Physics from Florida State University. He has a Naval Engineer’s Degree and a Master of Science in Mechanical Engineering from the Massachusetts Institute of Technology. His personal decorations include the Meritorious Service Medal (two gold stars), Navy Commendation Medal (one gold star), Navy Achievement Medal (one gold star), and various unit awards.

NSWC Crane is a naval laboratory and a field activity of Naval Sea Systems Command (NAVSEA) with mission areas in Expeditionary Warfare, Strategic Missions and Electronic Warfare. The warfare center is responsible for multi-domain, multispectral, full life cycle support of technologies and systems enhancing capability to today’s Warfighter. NAVSEA employs a diverse, highly trained, educated, and skilled workforce – from students and entry-level employees to experienced professionals and individuals with disabilities. We support today’s sophisticated Navy and Marine Corps ships, aircraft, weapon systems and computer systems. We are continuously looking for engineers, scientists, IT and cyber specialists, as well as trade and other support professionals to ensure the U.S. Navy can protect and defend America. Please contact NSWC Crane Human Resources at crane_recruiting@navy.mil.