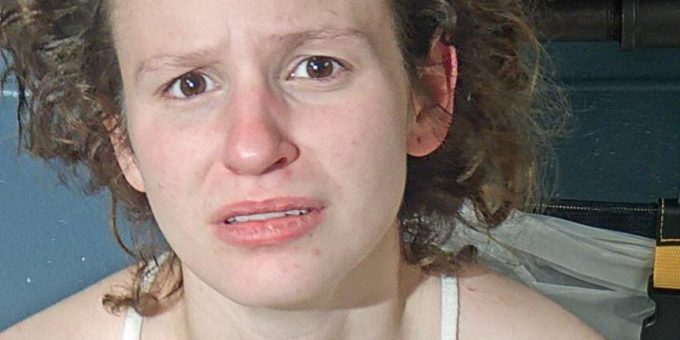 (MITCHELL) – A Fredricksburg woman was arrested early this morning after Mitchell Police officers were called to the area of Lawrenceport and Rivervale roads after a woman called 911 and reported she had been pushed out of a vehicle onto the side of the road and is 9 months pregnant.

Due to Lawrence County deputies being busy on other calls, two Mitchell Police officers responded along with an ambulance and Marion Township Fire Department first responders.

When offices arrived they were unable to locate the female. Officers and first responders searched the area covering several miles in an attempt to find the woman. They finally found the woman walking out of the tree line on the eastside of Lawrenceport Road.

The woman was eventually identified as 20-year-old Nila Smith, of Fredricksburg.

Officials say she told the police, “what do you want, I didn’t do anything wrong.”

She was then told that officers were looking for her after reports that she had been pushed out of a vehicle. Police then asked her for identification.

Smith stated in a loud aggressive manner, “What does that matter, why are you not helping me find my sister!” She then said her sister was Nila Smith and she was lost and her name was Mirah Kay Smith.

Witnesses in the area then told police and first responders that Smith had been in the area for several hours and was seen walking up and down the road and in backyards.

Smith continued to be loud with officers and was asked multiple times to stop yelling. Police and EMS believed Smith was under the influence of some type of drug, but Smith refused any medical treatment.

Smith was then arrested on charges of public intoxication, disorderly conduct, and identity deception.

Once in the back of the police car, Smith began drooling and foaming at the mouth and was immediately placed in an ambulance and transported to IU Health Hospital.

Once at the hospital Smith began crying and revealed her true identity and provided police with her identification which she had hidden inside her pants.

After being released from the hospital she was transported to jail.