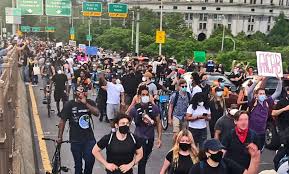 The bridge, which connects Louisville, Kentucky, to Jeffersonville, Indiana, is one of the only toll-free bridges crossing the Ohio River, according to news outlets.

Protesters set up signs and banners on the roadway with images of Breonna Taylor, a Black woman shot and killed by Louisville Metro Police officers who were performing a no-knock warrant.