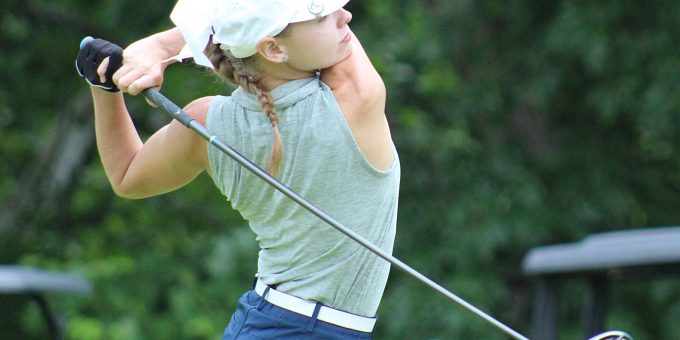 BEDFORD – Cutting stone is a Norman business. Taylor Norman, one of the recent Bedford North Lawrence stars, was all business as she chiseled her name into City history on Sunday afternoon.

Norman joined her peers and former teammates, those she has placed on pedestals as role models and those who motivated her to achieve, by winning her first Bedford Women’s City championship at Otis Park.

She fired a second-round 75 and cruised away to a 7-shot win over defending champion Olivia Sanders with a 36-hole total of 150. First-round co-leader Peggy Taylor, who won the crown in 2003, was third at 159.

Norman took command with a solid front nine, making the turn with a four-shot lead as her competition faltered, then posted two birdies on the back nine while finishing her coronation tour.

“This feels really good, it takes a weight off my shoulders,” Norman said. “I’ve been wanting to win so long. So this is definitely a relief.”

She started the final day with the usual nerves, but those quickly vanished as she surged ahead. Then it became a day of “just trying to keep it in the fairway, hitting greens, playing a steady round,” Norman said. “I started with a lot of pressure on myself, but then I looked at the scores and decided to just keep playing my game and relax.”

Norman birdied the par-5 fifth on the front, then tamed the 12th and 16th on the back nine while avoiding any damaging double-bogeys that might have given her pursuers a spark of hope.

She joined Kennedy Holtsclaw (five titles) and Kori Jacobsen (three) as recent BNL standouts to add the City crown to the resume. Now she will start preparing for her next college season at Saint Francis.

BNL’s Colten Girgis won his second straight Junior City title, using a hot putter to post a second-round 77 and hold off teammate Trevin Hutchinson by two shots with a 36-hole total of 153.

Girgis, struggling with iron accuracy, relied on his short game. He needed only 28 putts while scrambling to protect the four-shot lead he started with. Hutchinson applied pressure with 5 birdies en route to a 75, but Girgis refused to flinch and make every putt from inside 7 feet.

“It’s definitely an honor to win it twice,” Girgis said. “Everyone has gotten so much better, and they had their A games. I had to bring mine. The putting was phenomenal.”

Girgis was making up for lost time. He missed the bulk of the 2019 BNL season with an injured back, then suffered as the 2020 campaign was wiped out by the coronavirus epidemic. As he approaches his senior season, this title helped make up for the last two years.

“It helps me get back in the golf mood,” he said.

In the girls Junior City, Sanders won the title with her 81 (her score counted for both tournaments), breezing to a 16-shot win.

The most drama came in the Senior City. Dennis Gratzer birdied the first playoff hole to edge Craig Reiner and Kim Henderson for the top honor. All three men finished 36 holes with a 4-over 148 totals. Gratzer and Reiner both posted identical scores of 74-74, while Henderson had the best score of the final day with an even-par 72.