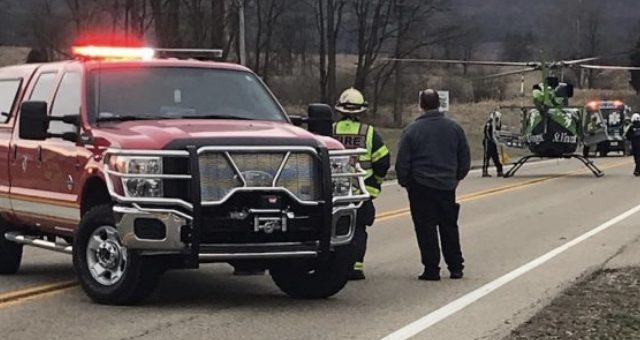 (BEDFORD) – Members of the local 9-1-1 Board met on Thursday morning. They say they are concerned by the lack of ambulance coverage in Lawrence County. However, they say there is not much that can be done by the board itself.

The board says this is an issue that will have to be addressed by Lawrence County, Bedford, Mitchell, and Oolitic governing bodies.

The AMR Ambulance Service has reduced the amount of ambulance coverage for Lawrence County. As of August 31, AMR will no longer be providing contract services for St. Vincent Ascension Dunn Hospital.

At one time, AMR Ambulance provided at least three ambulances to the area. AMR has since reduced that amount.

In addition to 9-1-1 emergency calls, both ambulance services provide inter-facility transfers from their respective hospitals, transporting patients to other hospitals that provide more specialized care.

When those ambulances leave to go to other facilities this leaves the county without an ambulance from several minutes to several hours depending on where that patient is being transported.

Ambulance coverage both for the hospitals and 9-1-1 has reached a critical point. There have been several occasions where Orange County and Monroe County had to cover emergency calls in Lawrence County.

But, this issue is not unique to just Lawrence County. On several occasions both AMR and IU Health Ambulance Services have covered emergency calls for both Orange and Monroe County.

However, the AMR Ambulance Service does not receive any kind of compensation for providing the back-up service to Orange County.

In the City of Mitchell, there were more than 976 calls for Emergency Medical Services in 2019.

Cases of no ambulance being available to respond to a call are increasing:

In neighboring counties, Monroe County has purchased 2 ambulances for IU Health Bloomington during a 12 year period. In return., the county asked that they not be charged for transporting inmates from the Monroe County Jail.

Orange County Commissioners recently signed a contract with the Orange County Ambulance service to provide coverage. However, neighboring counties are covering their calls to handle shortages of ambulances available.

Jackson County is a county-operated ambulance service who’s budget is around $2 million.

Greene County is a county-operated ambulance service. Last year they were in discussions about discontinuing the county ran ambulance but decided to keep it in operation. The Linton Fire Department also provides an ambulance service, and Center-Jackson Territory just started a Basic-Life Support Ambulance on an as-needed basis for Greene County.

Martin County contracts out ambulance services to private companies for their county with no local hospital affiliation. The contract is bid on whenever each contract expires at each term.

At this point in time, neither the Lawrence County 9-1-1 Board nor Lawrence County Commissioners have created a short or long term plan to deal with the county emergency medical issues.

Officials say Mitchell and Oolitic, as well as all the county volunteer fire departments, have medically trained personnel to handle medical emergencies.