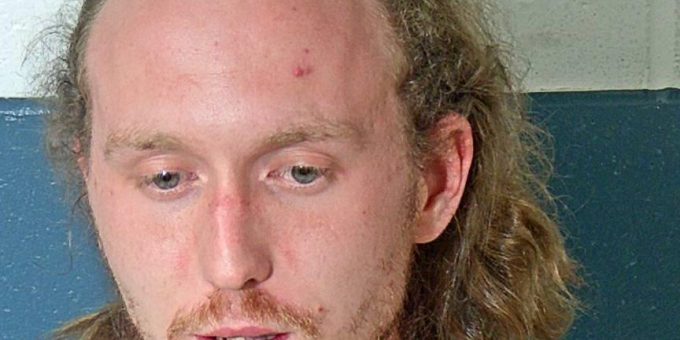 According to a probable cause affidavit, at approximately 1:40 a.m. officers were called to the 100 block of East Street in Williams after a report of an unwanted male at the home.

When police arrived the homeowner told officers Johnson had come into the house through the back door and punched him three times in the mouth with a closed fist, splitting the man’s lip. Johnson then fled from the home.

Johnson is the son of the homeowner’s girlfriend, who had let Johnson in the house. The homeowner thought Johnson might have run to the neighbor’s house.

The homeowner told police he had offered Johnson some work but Johnson had purchased a bottle of vodka instead.

He told police Johnson was dangerous and would fight if confronted.

Police searched the area for Johnson but were unable to find him.

Then at approximately 3:19 a.m., an officer was standing in the roadway watching the residence with night vision when he caught a glimpse of movement between two buildings. They then heard a man yelling and attempting to enter the caller’s home by kicking in the front door.

As the officer approached, he identified Johnson, drew out his taser and ordered him to the ground. Johnson complied and was arrested.

During their investigation, police learned Johnson was also wanted on two active warrants.