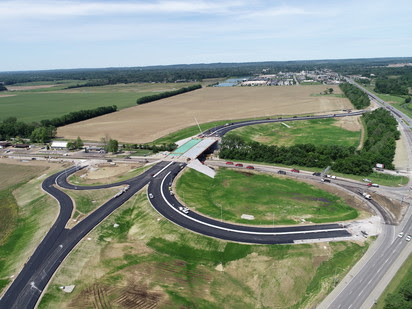 (COLUMBUS) – Milestone Contractors plans to switch S.R. 46 EB traffic to its new configuration at the railroad overpass in Columbus between 8 a.m. and noon on Friday, June 26, weather permitting.

At that time eastbound traffic will utilize the new bridge over the railroad and S.R. 11, as well as new loop ramps and a traffic signal. Westbound S.R. 46 will remain in its current pattern through mid-to-late July as work continues to prepare the bridge and ramps for traffic.

The new signalized intersection at S.R. 46 and S.R. 11 is known as a “Green T” or “Continuous Green T” intersection. These types of intersections allow for free-flow traffic in one direction (S.R. 11 SB) by using acceleration and merge lanes for left-turn movements to and from the intersecting road (S.R. 46).

The signal at the new intersection will be activated on Friday. Also scheduled Friday is the reopening of S.R. 11 at S.R. 46 following pavement reconstruction and drainage work. Lane restrictions that began in early May on the 3rd Street bridge will also be removed following a polymeric deck overlay.

Contract work will continue near the new overpass through the rest of the summer and fall into next spring, including removal of existing S.R. 46, seeding, sodding, and project clean-up.

Motorists are reminded to slow down, use extra caution, and drive distraction-free through all work zones, especially as drivers adjust to new traffic patterns.