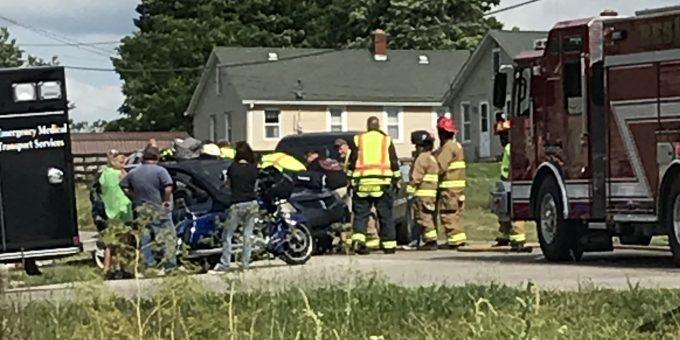 (BEDFORD) – Two people were injured in a three-vehicle accident on US 50 East and Brown Station Road Tuesday afternoon.

According to a Lawrence County Sheriff’s Department police report, 23-year-old Lauren Paxton, of Bedford, was traveling eastbound on US 50 East in a 2004 Pontiac Vibe and was attempting to make a left hand turn onto Brown Station Road.

At the same time 36-year-old Matthew Tedrow, of Seymour, was also traveling eastbound on US 50 East in a 1996 Dodge Caravan. Tedrow did not see Paxton’s vehicle slow to make the turn and collided into the rear of her vehicle. Tedrow said he couldn’t remember if Paxton had her turn signal on and he was having difficulty seeing due to the sun.

The collision caused Paxton’s vehicle to spin into the westbound lane and strike a 2002 General Motor Sierra pickup driven by 17-year-old Christian Roberson, of Seymour, who was traveling westbound on US 50 East.

Roberson said he slammed on his brakes in an attempt to avoid the collision but was unable to.

Tedrow’s vehicle went off the south side of the road into a small ditch.

The Bedford Fire Department Extrication Unit removed the driver’s side door to free Lauren Paxton from the vehicle. She complained of pain to her lower back and hip. Her passenger, 44-year-old Michell Paxton, of Pekin, complained of body pain.

Both were taken by an IU Health Hospital for treatment.

Lauren Paxton told officers she did not have insurance on her vehicle.