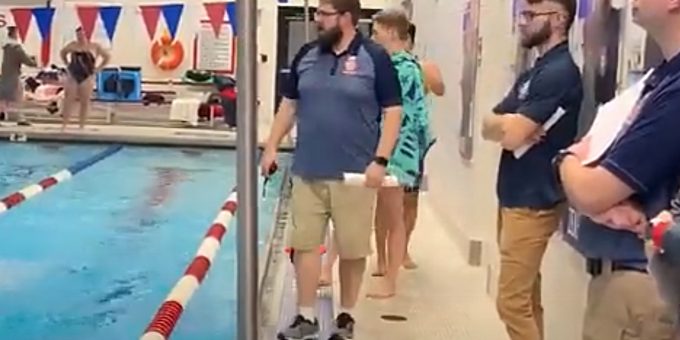 BEDFORD – Terry Tlustek reached a crossroads point in his career, with a decision on the path to take. The choice was difficult: stay with the familiar, or uproot his family, leave the swimming program he had sustained and nurtured at Bedford North Lawrence, and move 24 hours away to a new life.

Devout men seek guidance when faced with such a weighty choice. Tlustek and his wife Bethany prayed about the selection. The answer, they determined, meant a farewell.

After eight successful seasons as the boys and girls swimming coach at BNL, Tlustek has resigned to pursue his dream, moving his bustling family (five children) to St. Anthony, Idaho to teach history at South Fremont High School.

At age 40, Tlustek did not act on a whim. His wife is from the St. Anthony area, and Tlustek graduated from BYU-Idaho. They both loved their jobs, their church family, here. The chance was just too tempting to pass. South Fremont’s gain is a huge loss for the Stars.

“When we were making the decision, we made it a spiritual one, that God needed to be part of the decision we make,” Tlustek said. “Let us know which direction we needed to go. There was a lot of prayer.

“It was a very tough decision. We were trying to not just go with our heart but with our head as well. We knew it would be a chore, but once we made it, everything just fell into place, which was kind of a testament to us that we made the right decision.”

Once Tlustek gets over a decade of accumulated “stuff” ready to move, he will leave behind a legacy. Swimming has quite a local history, with state champions, state finalists, sectional titles and conference crowns. Tlustek, a 1998 BNL graduate, is proud of the programs he leaves behind.

“One of the things I’m proud of is keeping continuity,” he said. “After my first year, we had a bit of down turn as far as not as many kids coming out, and there were thoughts about making things easier and no so intense. Maybe to attract more kids. But I knew that wouldn’t keep the quality, so we stuck with it.

“The biggest thing was ending the 40-year streak for a girls sectional (in 2018), and with the guys it was keeping things competitive, always competing for a sectional championship and doing as well as we’ve done in the state meet. So it’s leaving on a high note.”

Tlustek’s successor will need to duplicate his passion for the sport (which demands a lot of time and dedication) and his drive to find talent in a shallow pool.

“Everybody here wants to be the next big basketball player, and it’s just the way that baseball, football and basketball get a lot of the attention,” Tlustek said. “So you have to do a lot of convincing. It’s hunting down people and encouraging them to try something new. We found some unexpected talent in unexpected places.

“There has to be a passion for it, a certain amount of drive to recruit and get kids to come, to build them up little by little. We could lessen that, but we’d be less competitive. I hope it continues.”