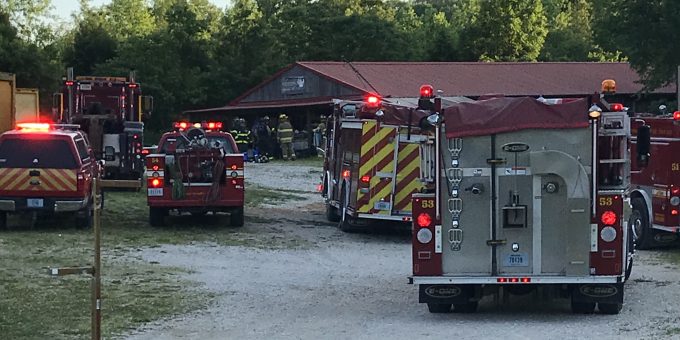 (MITCHELL) – Firefighters from Marion Township Fire Department responded to 8037 South State Road 37 to the Quarter Store after a wrecker got tangled in a telephone wire and knocked a powerline onto the facility.

“Smoke and fire were seen when this happened, so I quickly called the fire department,” said Wes Jackson, a driver for Gear Works Wrecker Service.

Power to a near-by trailer park was also knocked out, leading some residents to step outside their homes until Duke Energy could get power restored.

The only damage to the building was to the mast for the power connection, and a power pole was seen leaning at the scene.

Marion Twp. responded with four engines, the brush rig, and two command vehicles. Mitchell and Shawswick Fire Departments were originally dispatched on the call but were not needed.

The Quarter Store is a thrift store to help those with clothing and other needs. The store is operated by Brenda Hester, and the building is owned by Larry Root.

God’s Place ministries were started in 2006. As a response to local needs, they operate a food pantry supported by the Quarter Store and local donations. The Quarter Store itself is based on donated items that they sell for a quarter except for furniture, appliances, and a small yard sale area to help pay rent and utilities. There have been thousands of meals provided to local families and individuals in need, according to a Facebook post about the Quarter Store.

Due to COVID-19 the store was not in operation at the time of this incident.