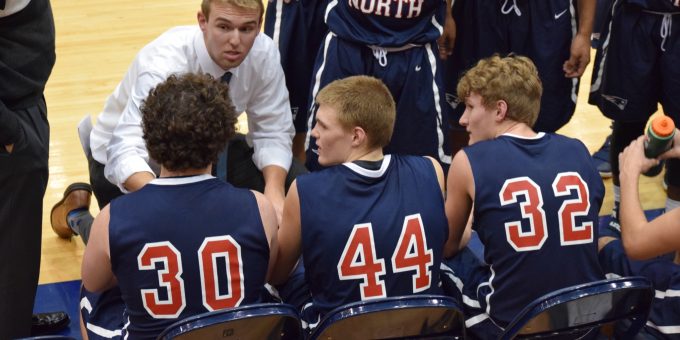 MITCHELL – Basketball has always been in Jackson Ryan’s veins. He’s a coach’s son who grew up learning to dribble right after walking, a former player who wore the Bedford North Lawrence uniform. Now he’s going to bleed blue.

Ryan, a 26-year old taking over his first boys program, was named the new head coach at Mitchell on Monday night. He succeeds Doug Thomas, who went 67-106 in 8 seasons with the Bluejackets.

Ryan, who graduated from BNL in 2013, has previous experience as a junior varsity coach at Terre Haute North (two seasons) and Seymour (one year). He also served on Tom Bradley’s staff at Orleans.

His goal has been following in his father’s footsteps. Mark Ryan came up through the BNL system and served as head coach from 1996-2005.

“When I got the call, I can’t put that into words, how excited I was,” Ryan said. “It’s something I’ve worked toward for years. To finally have that dream come true, all the hard work – the hours, the practices, the scouting and the drives, so much time behind the scenes – to be a reality is pretty special.”

Ryan played for the Stars under Jamie Hudson, averaging 5.9 points and 4.0 rebounds as a senior. He played one year at Greenville College, than transferred to Indiana State and served as a team manager for ISU men’s coach Greg Lansing.

He got his start in Terre Haute, hired by Todd Woelfle to direct the JV for the Patriots at the tender age of 21.

“Jackson was wise beyond his years,” Woelfle said. “I felt like he was ready. He did an excellent job, even though there wasn’t a lot of age difference. He has an excellent background, and I felt like talking to him he was a guy I could trust.

“He has a great work ethic, the ability to establish relationships with players, faculty and staff, community members. He has a very bright future.”

He came by that naturally, having spent his childhood around the BNL program. Mark went 126-72 in his nine seasons with the Stars, winning two Class 4A sectionals and a regional championship. BNL hasn’t won a sectional since 2001.

“He had a love for the game, which was something I saw, something I grew up with,” Jackson said. “I wanted to continue in his footsteps. Being on the sideline together (Mark was a volunteer assistant at Seymour), we get along a lot better than we used to.

“It’s really cool now for everything to come full circle and be on the same side of things. We’re both very similar on what we expect, how we do things, what we see with the game. I’ve been learning from him for the past 26 year of my life.”

Ryan will have challenges ahead with the Bluejackets. Mitchell, which went 11-11 last season and lost to Eastern Greene in the first round of the 2A sectional, has had only one winning season since 2010. The Bluejackets won their last sectional in 1997 (the last year before the switch to class basketball). He will have to build from the lower levels.

“One thing that excites me about the opportunity is to build a program as a whole, start at the elementary level, start at the bottom, connect those kids to the high school kids and connect those high school kids to the community,” Ryan said. “Make it my own program. I’m exited for the challenge. I’m here for the long haul. It’s not going to be overnight. It’s about the root and not the fruit. So we want to make sure we get a solid foundation.

“Early on, starting defensively, we’ll be very basic on our fundamentals, strictly man to man. Eventually I want to do some different things, but I want to stress the fundamentals and walk before we can run.
Offensively I want to give the kids as much freedom as possible, spread he floor and let them do their thing.”

Ryan will rely on his previous experiences under the mentors that helped him get started.

“Being under Todd, his biggest strength is scouting,” Ryan said. “I really learned how to see the game, figure out what we need to do, see what the other teams are doing. He’s a great offensive mind, so that was a great experience.

”With Tom, he showed how to run a program, how to carry yourself as a head coach, how organize and communicate, his demeanor on the sideline. Dad was a little more fiery and outspoken, while I’m a little more like Coach Bradley. And playing under Coach Hudson, I really thought he was a player’s coach. When I say that, he was always fair to his players. If you played hard and did your job, he was going to play you.”

Ryan was also hired as an elementary teacher, a position he held at Orleans.

“What we were looking for is someone young and energetic, to bring enthusiasm and excitement to our basketball program, hopefully get things rejuvenated,” said Troy Pritchett, Mitchell’s principal and football coach. “Coaching is a young man’s game because it requires a lot of time and dedication, being involved with the program all the way through. He will be a good fit for all of that.”

Ryan hopes to get started in July as the IHSAA lifts coronavirus restrictions. Then he will start the countdown to the start of official practices for the 2020-21 campaign (currently set for Nov. 9) and then the look ahead to the renewal of the rivalry with his alma mater. He will walk into BNL Fieldhouse as the enemy.

”I would like to sit here and say it’s just another game, but I’m sure when we get there in the moment it will be very emotional, very nervous,” Ryan said. “But it will be more about the kids. I will want it for them. It’s a rivalry game. I want them to be successful, But we have a lot of work to do between now and then.”

The Mitchell Community Schools board also approved the hiring of Tim Haworth as the new girls coach.. Haworth, who coached the Mitchell boys from 2004-11 (going 64-84 in that span), succeeds former BNL standout Jamie Cummings in that role. Cummings was 17-29 in two seasons, including 10-13 last year.