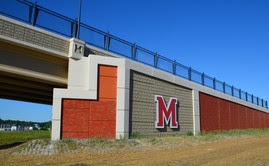 (MARTINSVILLE) – The first cars have driven across the new Grand Valley Boulevard overpass and the first pedestrians have tried out the new sidewalks.

The new overpass opened this morning.

It connects Martinsville High School and neighborhoods west of State Road 37 with businesses east of the highway.

When you cross the new overpass, here are some facts to keep in mind.

All of the I-69 project work is carefully coordinated. Grand Valley was the first overpass constructed because it will serve as an important east-west connection during I-69 work at other access points.