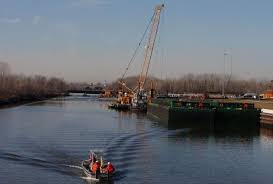 (EAST CHICAGO) — More sediment will be removed from an Indiana canal to allow barges with full loads to use the waterway.

The dredging process is expected to start in July, said Fernando Treviño, executive director for the East Chicago Waterway Management District, which supervises the commercial, industrial and recreational development of East Chicago waterways.

“They had to ship some of their merchandise or resources at half or other levels because they would hit bottom,” Treviño said of local industries using the canal.

About 1.6 cubic yards (1.22 cubic meters) of sediment has been dredged from the canal since 2012. Before that, the canal had not been dredged since 1972 because of contaminated sediment and the need for a suitable disposal facility.