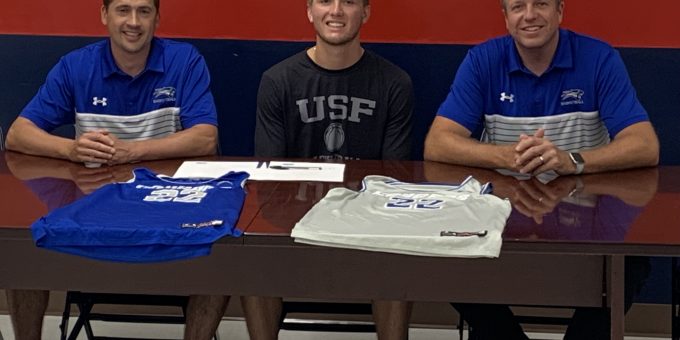 BEDFORD – Brayton Bailey, who has scribbled his autograph a few times during his basketball lifetime, signed the most important piece of paper of his career.

Bailey, a recent Bedford North Lawrence graduate (when the diplomas are finally handed out in July, delayed by coronavirus restrictions), officially signed to play with the University of Saint Francis on Wednesday afternoon.

Perhaps he was out of practice? Jotting his cursive signature took a few moments, but he’s made sure his basketball skills have stayed sharp during these recent times of uncertainty. One thing is certain – Saint Francis coach Chad LaCross, who made the long trip from Fort Wayne just to witness the brief paperwork ceremony, knows he got one of the best guards in Indiana.

Bailey’s numbers prove that. He averaged 20.5 points, 7.7 rebounds and 5.6 assists as a senior for the Stars and finished second on the school’s career scoring list with 1.579 points. He was named All-State in Class 4-A.

He joins a powerful NAIA program. Saint Francis went 21-11 last season under LaCross, who was voted the NAIA Div. II national coach of the year in 2016 and owns a 239-105 record in 10 seasons.

“He’s a great leader,” LaCross said. “We love the way he plays, he makes everyone around him better, the way he can finish. I thought, just watching the games we watched, he never got rattled, never got sped up. His game will translate very well to the college game, the way we play and our style. And the way he competes on both ends of the floor.”

Bailey has not been idle during the stay-at-home hibernation. He spent days shooting, running 2.3 miles, preparing his body for the next level. He’s set to report to campus on July 6 and begin workouts and scrimmages while helping with a Saint Francis summer camp. It’s not the usual three hours of 5-on-5 games during a typical summer, but that sounds like the back-to-normal life so many athletes are craving.

“Just getting up there and getting on the court. I’ve been ready,” Bailey said. “I’ve been working out. I’m ready to actually do something and play.”

The Cougars use a four-guard, one-big system what will allow Bailey, who committed to the program after considering offers from Western Kentucky, Lindsey Wilson and other Midwest programs, to use all his skills.

“We let our guys play a little bit, and he will have the freedom,” LaCoss said. “The other thing I really like is the other things than just scoring. He rebounds, he passes, he sees the floor well. That’s the biggest thing, just his understanding of the game is outstanding.”

Saint Francis competes in the Crossroads League with other state programs, including Bethel, Grace, Marian, Indiana Wesleyan and others. This season the NAIA will combine into one division.

The NAIA is considering the shortening of the basketball season. The governing boy has already announced the truncating of football (to 9 games) and volleyball (to 22 matches) for the coming fall campaigns, and most campuses will be adjusting to an earlier school calendar that will end the semester before December.