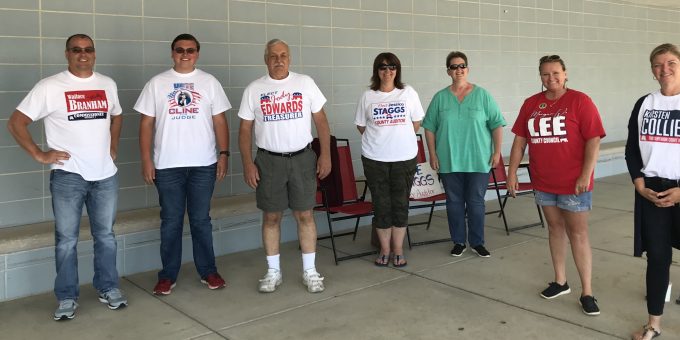 The polls opened at 6 a.m. this morning for the 2020 Primary Election for Lawrence County voters.

There are only four voting centers in this year’s primary.

“If we had all ten voting centers, there would be no way we could staff them,” said Billie Tumey in an earlier interview. “Those older individuals that normally staffed the polls decided not to volunteer this year.”

Tumey reported a new group of younger people decided to be a part of the election process this election and are ready for this year’s primary.

“The opening of the four voting centers was smooth, save for a few minor issues that were quickly resolved by Billie and staff,” said Heather dela Cruz, Voter Registration Clerk.

“The Lawrence County Election Board has already been out visiting voting centers making sure things were running smoothly,” according to Cruz.

The busiest voting center prior to Noon today was at the Mitchell Community Center which had a continuous amount of voters passing through. More than 245 voters had passed through the polls prior to 11 a.m. at that location, according to officials.

All the candidates in this year’s election stated campaigning was difficult with the COVID-19 pandemic preventing in-person contact that normally accompanies an election.

No candidates or their workers were able to hand out literature or candy at the polls today.

Stay updated with complete election results after the polls close beginning at 6:30 p.m. on 1340 AM WBIW and at wbiw.com.