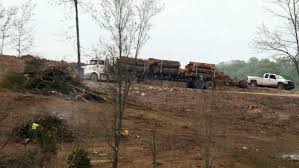 (BLOOMINGTON) – The Indiana Court of Appeals has again rejected a Monroe County resident’s request for an injunction that would prevent logging from taking place on land near his home.

A divided Indiana Court of Appeals in March 2019 reversed a preliminary injunction that halted logging on more than 250 acres of forested property near Lake Monroe owned by William and Nicole Huff.

When logging trucks rolled into the subdivision to take out timber in certain parts of the Huff property, Shores resident Michael Cain filed a preliminary injunction to stop operations.

Huff’s attorney has maintained the family is following all state and federal regulations so the work doesn’t pollute the reservoir. He added the trees are being harvested in preparing for the future use of the land in accordance with a stewardship plan that had been developed in concert with the Indiana Department of Natural Resources’ Division of Forestry.

A split appellate panel later lifted the injunction, but when the Huffs began using the easement to log trees on another parcel of land attached to its real estate called the Chumley parcel, Cain filed a second motion to stop the logging.

The Indiana Court of Appeals denied that second motion.