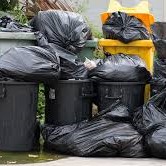 In the wake of that trash surge, Indianapolis city workers and private trash-collecting contractors have experienced longer days for drivers, lengthy lines at the dumping site, increased repairs for hard-running trucks and expenses.

Republic Services, which serves homes in Marion County and many of Indianapolis’ surrounding suburban counties, saw the volume of weekly residential trash increase 28% when colleges and schools closed and families began eating at home and ordering takeout, the Indianapolis Business Journal reported.

Residents stuck at home also started spring cleaning that resulted in a surge of castoffs, which Republic said led to a 48% increase of trash in April.

Rumpke Waste & Recycling, which serves households in 31 Indiana counties, has seen a 25% increase over the last 10 weeks, company officials said.

Indianapolis city employees handle residential trash collection for about 120,000 households. Republic handles 135,000 households and Waste Management about 16,700. The city pays both companies per household per month. The contractors dispose of the waste they collect and invoice the city. Cost is based on tonnage.

Trash increased so much that Indianapolis suspended heavy pickup from March 30 to May 4.

“Otherwise, the situation would have been even more challenging,” said Hannah Scott, a spokeswoman for the Indianapolis Department of Public Works.

Waste Management has reported seeing an increase of 25% in residential trash pickup.

“While we’ve started to see a leveling off, we expect elevated waste volumes at the curb to persist as residents continue to work from home, and businesses are reopening in phased approaches,” said Tanisha Sanders, director of government affairs and communications for Waste Management in Indiana, Michigan and Ohio.