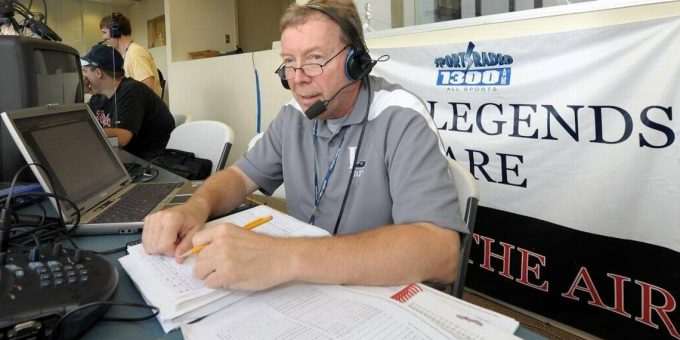 LEXINGTON, Ky. – Late at night, with the transistor radio – powered by a 9-volt battery – tucked under the pillow to avoid parental detection, with the static causing the distant voices to fade in and out, a young man strained to hear his heroes describe what the mind could only envision.

The struggle, completely foreign to today’s generation, was real. The airwaves crackled as summer storms caused atmospheric interference, but the kid wasn’t discouraged or sleepy. Not with his favorite baseball team in action on the West Coast, not with those familiar voices telling the story.

Before social media, before cable sports networks, before the constant barrage of television, radio was king and baseball was the national pastime. Listen, imagine and wonder.

That’s how young Keith Elkins, growing up in Bedford, got hooked. The rambling of Harry Caray, the dulcet bass tones of Jack Buck, as they broadcast St. Louis Cardinals baseball across the Midwest, were daily previews of the path Elkins would follow.

Elkins, a 1970 graduate of Bedford High School, has spent his career in broadcasting. After graduating from the University of Kentucky in 1974, he has been a Lexington fixture, first with the local NBC affiliate, then in public relations with UK, followed by nine seasons as the play-by-play man for the Class A Lexington Legends baseball team.

Now Elkins is the studio host for men’s basketball on the UK Sports Network and he tapes podcasts for WUKY. All because a Lawrence County kid got introduced to the outside world through the magic of radio.

“When I was growing up, WBIW was on the Cardinals network, so I got to listen to Harry Caray and Jack Buck every night,” Elkins said. “At a time when there wasn’t much baseball on television, that’s how you followed your team. So I got to hear them describe the old ballpark, Sportsman Park, and it was a thrill to go there (he attended his first game in 1961) and see all the things I had heard them talk about. That enhanced my interest in baseball and broadcasting.”

Life in Bedford was simple for a 1960s kid. His mother Wilma was a teacher and guidance counselor. He played Little League with Danny Bush, Ed Owens and others. He roamed center field (like his idol Mickey Mantle) for BHS coach Jack Moon and future Hall of Famer Orval Huffman as a Stonecutter. He followed his beloved Cardinals through the pages of the Louisville Courier-Journl, the Indianapolis Star, and the Times-Mail. He was a sports junkie.

“I really loved growing up in Bedford, was fortunate to live my entire childhood there,” Elkins said. “The friends made then – friends I hope to see at the 50-year reunion later this year – are ones I met in kindergarten. Those have been lifetime friendships, and I feel fortunate to have put down roots at the start of my life in a place like Bedford.

“It was a wonderful opportunity to take advantage of the smaller town, yet we seemed to have opportunities to do a lot of things.”

Elkins got his first taste of the future while attending a high school broadcasting institute at Indiana University, but he chose to go away for college. Lexington, near his mother’s childhood home, seemed a logical choice. Except for brief time in Jackson, Miss., he’s never left. “So far, it seems like a pretty good fit.”

Elkins has seen UK history. He was working with WLEX in 1978 when the Wildcats (featuring Jack Givens, Kyle Macy and other UK legends) won the NCAA championship, and he was reporting from the airport when the team arrived back from St. Louis after conquering Duke for the crown. He covered the 10-1 football team in 1977 that featured future NFL standout Art Still and Derek Ramsey. UK has won four NCAA basketball titles since he arrived in town. He interviewed UK basketball broadcasting legend Cawood Ledford and recently recovered that 1985 recording.

He went through the different coaching eras at UK, with Joe B. Hall, Rick Pitino (and his New York accent of ‘Rupp Arener’) and now John Calipari.

“Calipari is appropriate for this job,” Elkins said. “He can handle this job. He knows the media pressure, all the things involved, ever since he got here, and he’s had great success. But when you ask a question, the answer will be whatever he wants to say. He will take the interview in whatever direction he wants. He knows how to thrive in the fish bowl.”

Basketball still rules the Bluegrass, but baseball was his love. So when he got the chance to broadcast for the Legends, he was thrilled. Not many middle-age men would leave the comfort of an office to make long, bone-jarring bus rides across the southern section of the country to call 140 baseball games each season. Elkins did that for six years, starting in 2009.

“I truly enjoyed it,” he said. “Regardless of where we were, in the South Atlantic League, when I sat down to do a ballgame, I never wished I was somewhere else. It was that much fun.

“Sometimes it was a challenge because those ballparks are not great accommodations, or the road trip might have been a little rough. But I really enjoyed calling the ballgames.”

Elkins finished his final three seasons doing home games for the Legends before retiring from that position in 2017. He got to see future MLB stars Jose Altuve, Bryce Harper, Stephen Strasburg and others during his decade in the booth.

“It’s very different than football or basketball because with those two sports the challenge is to keep up with the game,” he said. “In baseball, you’re basically carrying on a conversation with the audience. You have to be ready with some things, because the pace of the game can change in an instant. You better have something ready to say. You just never know when the weight will be on you to carry the broadcast, as opposed to letting the action take care of itself. That makes baseball difficult, but it makes it a lot of fun. You can establish a connection with the audience.“

From Parkview, to Bedford Junior High, to Bedford High School, Elkins has limestone as his foundation. He has never forgotten.

Blame it on that transistor radio.