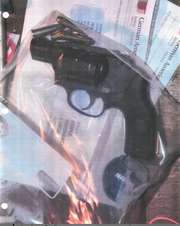 (PETERSBURG) — A sheriff’s deputy won’t face criminal charges for fatally shooting a southwestern Indiana man who had called officers to his home, claiming he and his wife were starving, a prosecutor has determined.

An investigation by Pike County’s chief deputy prosecutor, Sarah Christianson, found that county sheriff’s deputy Paul Collier acted to defend himself or others when he fatally shot Michael Faries on May 3, the Evansville Courier & Press reported.

Collier and a Petersburg police officer went to Faries’ rural home after the 69-year-old man called dispatchers, telling them he and his wife were starving and someone was shooting at them, according to Christianson’s investigative report.

Faries’ wife told a dispatcher that officers didn’t need to come because her husband was “wound up and angry,” according to a transcript of the 911 call. As his wife spoke, Faries yelled in the background about vigilantes and harassment, the report indicates.

Audio from Mills’ body camera shows that when he and the other officer arrived at the couple’s home, Faries’ wife allowed them inside but Faries told them to step back, and then agreed to talk to the officers outside.

After Faries told Collier, in response to the deputy’s questions, that he had a gun, Collier ordered Faries twice to take his hands out of his pockets, but after he refused the deputy fired two founds, the report states.

A revolver was recovered near Faries after he fell to the floor, bleeding, it adds.

The investigative report noted that Faries had a history of mental illness, leading him to make distressing 911 calls. Collier had responded to several of those calls at Faries’ residence and each time, the man was in possession of a weapon.