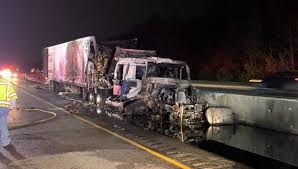 (BURNS HARBOR) — A worker doing construction sign maintenance along a northwestern Indiana interstate was killed early Friday when a semi-truck collided with his vehicle, which then fatally struck him, police said.

38-year-old Ryan E. Greer, of Knox, Indiana, was killed just before 3 a.m. when a tractor-trailer traveling east on Interstate 94 drove onto the right shoulder and hit the truck Greer and another worker for Traffic Control Specialist, Inc., were using, Indiana State Police said.

Greer was struck fatally by that truck, which he had just stepped out of after driving the vehicle to the scene to perform sign maintenance, State Police Sgt. Glen Fifield said.

The collision between the two vehicles sent the workers’ truck into a ditch and into a stand of trees, with the other worker still inside the vehicle. That worker was not injured and neither was the driver of the semi, a 54-year-old Ontario, Canada, man, police said.

After the impact, the tractor-trailer hit a wall and caught fire in the highway’s eastbound lanes near U.S. 20. The resulting fire destroyed the load of 37,000 pounds (16,782 kilograms) of frozen pork the semi was hauling, police said.