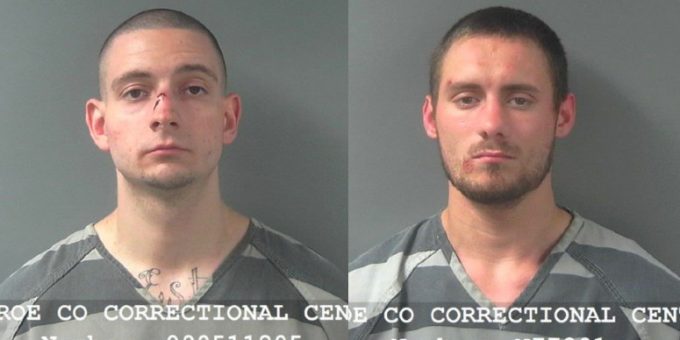 (BLOOMINGTON) – U.S. Marshals arrested two men in Bloomington on Monday after authorities tracked down a man with outstanding arrest warrants.

U.S. marshals contacted a Bloomington Police Department detective Sunday saying they were attempting to locate 25-year-old Jason Brown, who had outstanding arrest warrants for the charges of stalking, domestic battery, and criminal recklessness with a deadly weapon.

In the months leading up to his arrest, court documents note that Brown had repeatedly harassed his ex-wife through messages, phone calls, and voice mails. On multiple occasions he damaged her yard by driving his truck through her property despite a protective order prohibiting him from having any contact with her.

Officials believed Brown was staying in Bloomington and was possibly in possession of firearms and body armor. Several U.S. marshals traveled to Bloomington on Monday to arrest Brown.

Officers surrounded a home in the 100 block of East Driscoll Street where authorities believed Brown was staying.

Police say they saw Brown leave the house in a pickup truck with another man. Authorities began following the vehicle and the truck began to speed up and did not stop when the marshals turned on their emergency lights.

During the pursuit, the driver, 26-year-old William Bennett Jr., drove westbound on Southern Drive west of Grant Street around a barrier meant to close the road. The truck later failed to stop at an intersection on Walnut Street and collided with another truck.

The truck Bennett was driving was reported stolen out of Carmel, Indiana. Police found a handgun under the seat.

The two individuals in the other truck complained of neck and back pain and were evaluated by emergency crews at the scene.

Bennett was transported to the hospital after complaining of pain and an abrasion to his face.

Bennett is facing charges of vehicle theft with a prior conviction and resisting law enforcement with a vehicle.

Brown is facing charges on three outstanding warrants and a new charge of possession of a firearm by a serious violent felon.