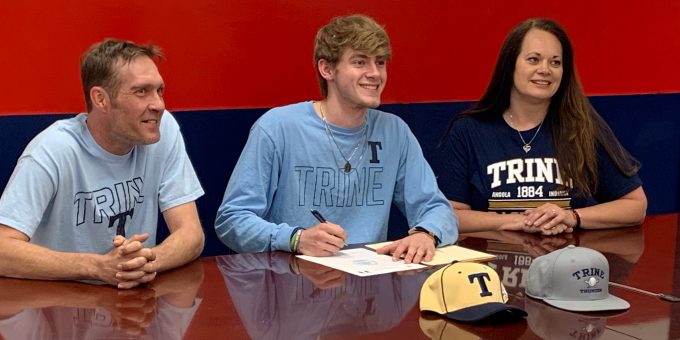 BEDFORD – Ethan Baer and Dalton Nikirk are among the lucky ones. Their senior baseball seasons at Bedford North Lawrence were ripped away by forces outside the wildest possibilities before the first pitch was thrown. But their careers will continue.

Baer and Nikirk, teammates and best friends, officially signed with Trine University on Tuesday afternoon, the first real baseball news on the BNL campus since the coronavirus epidemic swept across the nation and claimed spring sports in Indiana as one of its many victims.

The clock cannot be turned back. Baer and Nikirk will not join their senior teammates to don the Stars uniform and compete for conference and sectional titles. But time ticks constantly forward, and their future now includes more baseball.

“Being able to look at it like, this wasn’t my last season and I can move on, it didn’t get completely taken away from me,” Baer said. “It makes it a little easier to deal with. At the same time, my senior season, I wish I had gotten that chance.”

Trine, located in the far northern regions of Indiana, just a long home run from the Michigan border, was among the many NCAA Div. III programs that started the 2020 campaign, going 9-2 before all NCAA sports were shut down on March 13.

The Thunder, under head coach Greg Perschke, have a solid history, winning 286 games since Perschke took over the program in 2002 and helped the school transition from NAIA to the next level of competition. They won a school-record 25 games in 2013.

What makes Trine so fine?

“Right when I got there, it felt like home,” said Nikirk, who will major in sports management. “It was the first school I visited, and it honestly felt like Bedford. I was comfortable there, the size of the campus and everything about it.”

“I’m going for electrical engineering, and Trine has a very good engineering school,” Baer added. “I went on a couple of visits, and the campus is gorgeous. Kind of one of things where you walk in, and you know this is what you want to do.”

While neither got to post senior-year statistics, Baer and Nikirk were solid contributors for the Stars in 2019 (20-11 and sectional runner-up). Baer hit .324 and 6 doubles and a team-high 29 RBIs as an outfielder, while Nikirk hit .316 with 7 doubles and 23 RBIs at third base. They were hoping to lead BNL to a first-ever Hoosier Hills Conference title and a sectional championship in their farewell tour.

“I’m pretty anxious,” Baer said. “I’m really ready to get back on the field. It’s been a while.”

”It feels way better because I know I have more games to play,” Nikirk said. “It didn’t end at BNL. But I still would have liked to play one more year and accomplish the goals we had set.”

Now they will join forces once again.

“Hopefully it will be a blast,” Nikirk said. “I plan on having fun, winning more games, and making memories.”