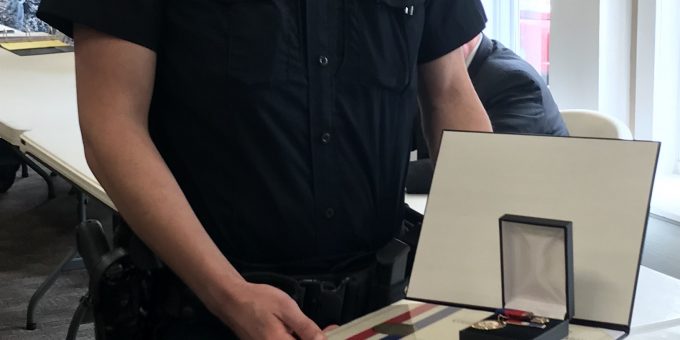 Bedford Police Chief Terry Moore stated, “On December 26th, 2019, Officer Tedrow was on the scene of an unrelated call and heard radio traffic of officers responding to a domestic dispute and proceeded to the address so he could help if needed.”

“Officer Tedrow was the first on scene and quickly noticed through a glass window on the front of the home that a man and woman were fighting over a shotgun. Without hesitation, Officer Tedrow entered the home and was able to safely remove the gun from the situation,” Police Chief Moore continued.

“Officer Tedrow’s action directly resulted in a potentially deadly situation being resolved with no injuries for all those involved,” said Chief Moore.

This action goes above and beyond and has not gone unnoticed by his peers or those involved.

“Officer Tedrow professionally represents the City of Bedford on and off duty and is well-deserving of the award,” Chief Moore concluded.