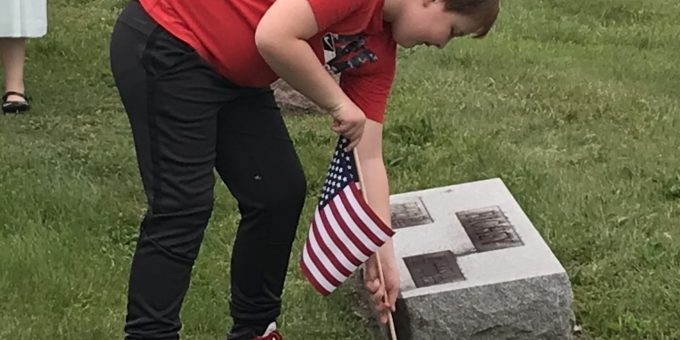 Approximately 20 volunteers associated with the group covered six sections of the cemetery to decorate the graves of the men and women who served.

Many of those were killed in action as they served the United States.

Along the way of decorating graves, Wayne and Mary Umphress met the grandchildren of Steve and Debbie Yeager from Georgetown, Indiana.

The Yeagers were just taking a walk around the cemetery and wanted to stop and educate their grandchildren on honoring local veterans.

Wayne Umphress served in the Air Force during the Vietnam War, flying more than 200 sorties a day during the war. A sortie is a combat mission of an individual aircraft, starting when the aircraft takes off. For example, one mission involving six aircraft would tally six sorties.

The Yeager grandson Eli stated, “I like the Air Force and being able to fly.”

“We just wanted our grandchildren to know what Memorial Day is all about, and the purpose behind it,” said Steve Yeager.

It took more than two hours to cover the cemetery with flags due to some of the grave markers falling into disrepair over the years, thus making it hard for volunteers to locate them. Volunteers were eventually able to find all of the graves.

While placing the flags on the graves, Wayne described some of the things he did while serving his country.

“Everyone nowadays cries and states ‘I want my education free, I want healthcare for free, I want everything free.’ Well, my response to that is to join the military,” Umphress emphasized. “My son Cody joined the Army back in 2005 during the second Gulf War. After five years of military service, he went to Indiana University and got five years of his education for free.”

Umphress joined the Air Force in October of 1962 and served until January 1, 1984, retiring as a Master Sergeant.

Umphress has volunteered for several organizations including the Hoosier Hills Armed Forces Association who also decorated graves just before the Memorial Day holiday.

Memorial Day is observed on the last Monday of May to honor the men and women who have died while serving in the military.

On both Memorial and Veterans Day, it is customary to spend time remembering and honoring the countless veterans who have served the United States throughout the country’s history. However, there is a distinction between the two holidays.

Memorial Day commemorates the men and women who died while in the military service of their country, particularly those who died in battle or as a result of wounds sustained in battle.

Veterans Day is the day set to thank and honor all those who served, in both war and peacetime regardless of whether they lived or died.

Veterans Day is always observed on November 11th regardless of the day of the week on which it falls.

The custom of honoring ancestors or by cleaning cemeteries and decorating graves is an ancient and worldwide tradition, but the specific origin of Memorial Day, or Decoration Day as it is first known, is unclear.

In early America, this duty was originally performed in the late summer and was an occasion for family reunions and picnics.

After the Civil War, America’s need for a secular, patriotic ceremony to honor its military dead became prominent.

After World War I, the day expanded to honor all those who have died in American wars.