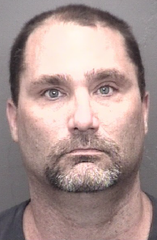 (EVANSVILLE) — An Evansville man allegedly attacked a neighbor with a weed eater, leaving him with cuts on his back, as the two men feuded over grass clippings left along a roadway, police said.

Gail Kammerer III, 48, was arrested Thursday on a preliminary charge of battery with a deadly weapon by Vanderburgh County Sheriff’s deputies.

He remained jailed without bond Friday morning ahead of a scheduled afternoon probable cause hearing, online court and jail records show. Those records do not list an attorney who could speak on Kammerer’s behalf.

Police said Kammerer was using his weed eater to trim a ditch when a 57-year-old neighbor complained that he was blowing grass clippings into the street. The neighbor told deputies he responded by driving his riding lawnmower down the road, blowing the grass clippings back onto Kammerer’s property, the Evansville Courier & Press reported.

Deputies said Kammerer told them he attacked his neighbor with the weed eater after the man intentionally blew clippings onto him. The neighbor, who was cited for provocation, was shirtless at the time of the attack and sustained several lacerations to his back.