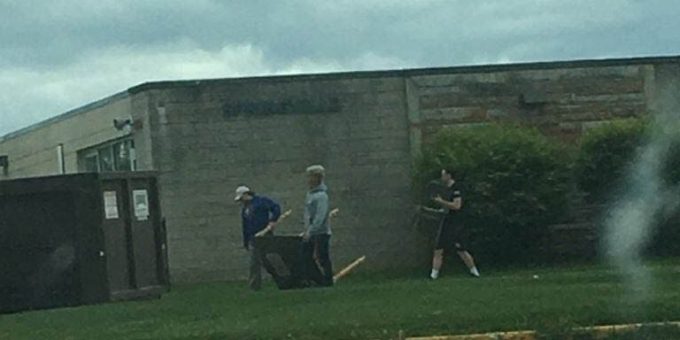 (BEDFORD) – North Lawrence Community School employees are working on cleaning out the schools that are scheduled to be closed due to consolidation.

Dumpsters could be seen at several of the schools this past week with school employees removing damaged items that can no longer be used.

“If a shelf or table has a missing screw or leg that is damaged it was hauled off. Other things that could be used for surplus were salvaged and put in a safe location for a future auction or use,” said Andrew Clampitt, Director of Communications for North Lawrence Community Schools.

WBIW contacted the school corporation after receiving several inquiries over the disposal of several items from area schools.

Parents were concerned over books, notebooks, and other items being disposed of by the school.

Fayetteville, Heltonville, Springville, and Stalker Elementary Schools were voted to be closed by the North Lawrence Community School Board earlier this year.

The Stalker Elementary facility will be repurposed for other corporation uses and the remaining buildings will be sold at a later time.

Officials say the North Lawrence School Corporation is always wanting to be open and transparent with the taxpayers, employees, parents, and teachers.

Any concerns or questions can always be addressed by contacting the corporation at 812-279-3521.